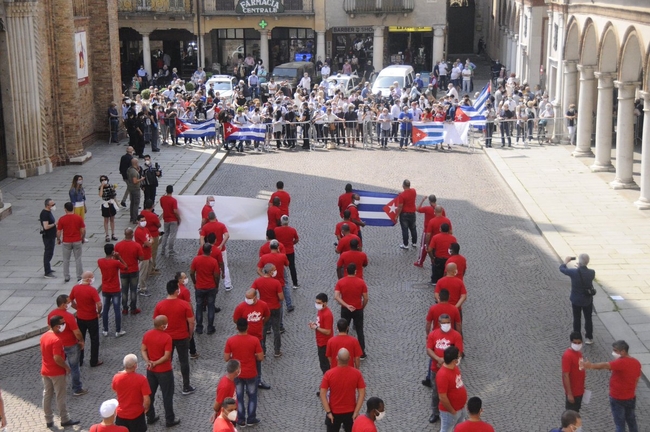 The Secretary of Health and Welfare of the government of the Lombardy region, Giulio Gallera, and the president of the National Association of Italian-Cuban Friendship (Anaic), Irma Dioli, attended the homage rally to support the Cuban doctors. Cuban ambassador in Italy, Jose Carlos Rodríguez, and the general consul in Milan, Llanio Gonzalez also joined the tribute in Duomo Square.

"Satisfied with the duty of solidarity they have fulfilled in the battle for life vs. COVID-19, the Cuban Doctors advance through the streets of Crema. The applause of the citizens embraces them and the infinite thanks of the Italian people."

"When you came here you said that your homeland is the world, so from now on you will always be our compatriots, in this vast world, often mistreated by the absence of the supreme value of solidarity," the Mayor of Crema, Stefania Bonaldi, said. Local news media exalted the commotion and thankfulness of Crema citizens who expressed their thankfulness to Cuban health professionals.

"It recalls the opposition to the economic blockade imposed on Cuba by the USA and supports the appeal promoted in Italy for the award of the Nobel Peace Prize to the Henry Reeve Brigade, operating in our country during the Covid-19 emergency, as requested by more and more international realities" the organizers explained.

Cuban doctors held over five thousand consultations in Italy and discharged 210 Covid-19 patients after the virus outbreak in March.​​​​​​​