The homeland opens its heart 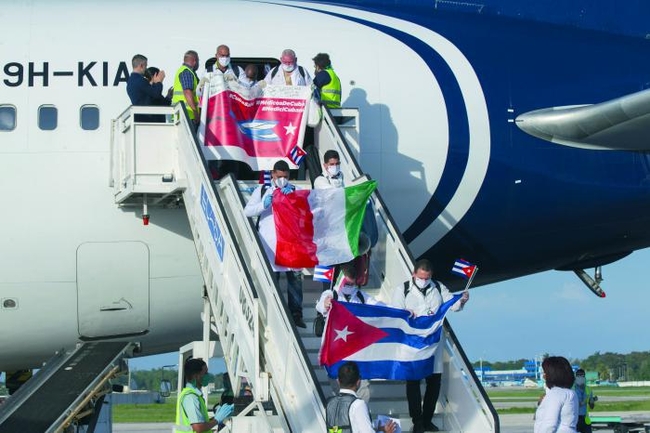 The 52 members of the Henry Reeve medical brigade, who departed for northern Italy last March 21 to join the COVID-19 battle there, set foot on Cuban soil last night.

The applause, with which Cuban doctors are rewarded every night for their tireless battle against the virus that threatens us today, rang out June 8, two hours earlier, as the 52 members of the Henry Reeve medical brigade, who departed for Lombardy last March 21, set foot on Cuban soil. Their mission would be the first in Europe undertaken by the contingent Fidel founded, allowing Cuba to illuminate the most dreary corners of the world with our health professionals.

A country, necessarily limited to staying home in front of screens, did not lose a step, accompanying and receiving the brigade from their living rooms.

From the jaws of the pandemic, when Italy was the epicenter two months ago, our heroes returned, stripped of face shields and without fanfare, with no other weapons than knowledge and humility, needed to integrate themselves into the perilous scene, where they minimized suffering and death, saving more than 200 lives.

With a mixture of feelings, bringing to their country unforgettable experiences, they carry in their hands the flags of both Cuba and Italy, forever twinned in the annals of history, no matter who was in pain and who was for life; without boasting of the more than 5,500 services they provided, with no more laurels than the honor of upholding the name of the distant land where they were born. They are Cuban doctors! Don't be surprised by anything they do!

With nervous, hidden smiles, red flowers, unusual greetings - required by measures in place to control COVID-19 – they are formally received after the arrival itself, in a hall where the song that moves us every night, about kissing the world, the one that describes the brave ones, “Valientes,” who see in the homeland all of humanity.

You see that they are singing behind their facemasks, their eyes shine more brightly, some take off their glasses. Everyone recognizes himself in the lyrics.

The President's voice surprises them, although he has not come, respecting preventative protocols that have been rigorously established. He conveys a virtual greeting, his own and that of his companions in this war to the death against the epidemic and for the life of the country, emphasizing one from Army General Raul Castro Ruz and the Cuban Communist Party. He shares the joy of seeing them return alive, with their duty done.

"We would like nothing better than to embrace them one by one, to thank them for their heroic mission," he says, and assures them that there will be time for that, when he will be able to hear their anecdotes and experiences. He tells them they represent “the victory of life over death, of solidarity over selfishness, of the socialist ideal over the myth of the market.”

And he reminds them that they have shown the world a truth that the enemies of Cuba have attempted to silence: the strength of Cuban medicine.

The messages continue to fill them with emotion, and seeking a way to respond, at the suggestion of the brigade’s leader, Dr. Carlos Perez, they sing the national anthem, as Cuba proudly looks on.

The long-awaited embrace - for now is consummated only with the heart - will be delayed a few more days, since there are health measures that cannot be ignored. A human line, marking the recommended distance, welcomes them as they board the bus taking them to quarantine, and they feel the embrace, the homeland, holding them tightly to our chest.