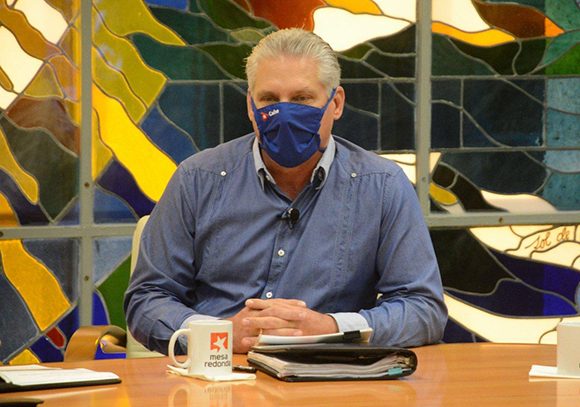 The Cuban President appeared on national television on Thursday 11 June to give the Cuban people details of the island’s plans for de-escalation from Covid-19 quarantine and control measures.

In a two hour broadcast on the ‘Round Table’ current affairs programme, the Cuban leader and other government ministers explained how three phases of measures will be rolled out across the country.

President Miguel Díaz-Canel said that each phase may start at different times in different provinces according to the specific circumstances and levels of infection in each region. For example, two thirds of the island is currently Covid-19 free, but Havana, which has the highest incidence, will be rolling out the recovery programme more slowly than other provinces. The president was also clear to point out that any measures would be gradual, staggered and controlled, and stopped or reversed immediately should the infection rate begin to rise.

Cuba currently has less hospital admittances than discharges for Covid-19 - an average of less than 10 new cases a day, compared to 50 at its height, and only one death in 14 days, with minimal numbers in severe or critical condition. The first of its medical brigades assisting in the fight against coronavirus around the world returned also returned from Italy last week.  The Cuban President was joined by the Prime Minister Manuel Marrero who explained how the provisions covered all aspects of the economy and society including health, tourism, labour and tax affairs, foreign and internal trade, transport, education, sport and culture.

The Cuban president acknowledged that a second wave of the pandemic was predicted between September and November, so measures would also be taken to avoid and minimise this, including reintroducing and maintaining some of the 500 measures implemented by the country to control the spread of the virus in recent months.

The use of face masks, which have already been obligatory in Cuba for several weeks, would remain in use during the first phase and there would be no large outside gatherings or crowding in public places permitted for the foreseeable future.

Tourism In the first phase of the recovery plan, national internal tourism would be the first to commence, operating with reduced numbers in hotels. When international tourism does eventually start back, it will initially be confined to hotels in the cayos: Cayo Santa María, Cayo Coco, Cayo Guillermo, Cayo Cruz and Cayo Largo del Sur, which are served by a separate airport and are self contained. No excursions to Havana or cities from the hotels will be allowed, and visitors will have their temperatures taken on arrival and be hospitalised if ill. A date was not given for when such measures will be introduced although it will not be before 1 August.

In his contribution during the Round Table, the Deputy Prime Minister and Minister of Economy, Alejandro Gil, highlighted the impact of the coronavirus pandemic on the world economy.

Although it is not yet possible to assess all the damages, the contractions in developed countries and the increase in poverty in Latin America and in other regions are palpable, he said.

"Of course, the Cuban economy also moves in that context. We had a significant decrease in the income of foreign currency, as well as the paralysis of a set of productive activities and services, which impacts productivity not only in the state sector, but also among self-employed workers, the latter with around of 250,000 licenses suspended, "he said.

Gil Fernández also referred to the increase in unplanned additional expenses for health services, isolation centres, transportation, and other activities closely related to the fight against COVID-19 which also contributed to a reduction in income to the state budget.

“In the world there has been a dilemma between health and economy, but for us that question is very clear: health is the priority. Since we conceived the confrontation plan, we have handled the concept that the most efficient way to protect the economy is to take care of our health. In that sense, we have no contradictions and that leaves us in better conditions for recovery, "he said.

Opening of wholesale markets for the self-employed Opening of restaurants at 30% and 50% capacity depending on space
Opening of parks, botanical gardens and zoos at 50% capacity
Schools which have been closed since March will remain closed over summer holidays. The school year will then be completed when schools reopen in September, and the new school year begins again in November.
Public pools with reopen in the summer at 30% capacity Beaches will be open with social distancing measures imposed.

In summary, President Miguel Díaz-Canel stressed that what was stated in the Round Table represented the basic concepts so that people could understand where we are going and how to get there. He announced that from 15 June, several ministers would appear on the radio and television program to explain the measures relating to their sectors in more detail, and that phase one of the recovery plan would start sometime between 17 - 22 June.   Referencing the new blockade measures introduced by the Trump administration the Cuban president said: “The entry of the new coronavirus presented us with a colossal challenge, because it came in the midst of a gale of actions by the US blockade. We have a brutal siege of the economy, financial persecution, propaganda campaigns, but that did not break us."

“Our adversaries learned that when we affirm that we are Cuba and we are continuity, we are not speaking of a simple slogan, but of an affirmation of our history of resistance and victory. Also, that we are promoting a hurricane of creativity to break adversities, "he added.

The broadcast lasted over two hours and provided details about every sector of the economy, the full broadcast and full report can be found in Spanish on the CubaDebate site here.