Online meeting - Another Education is Possible 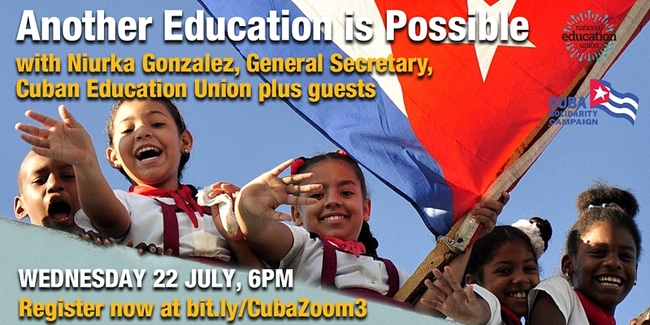 Drawing on themes raised in the recent publication, ‘Beyond the Blockade’, British teachers discuss Cuba’s alternative approach to education and society and the lessons drawn through four years of National Education Union (NEU) delegations.

The General Secretary of the Cuban teaching union joins us to discuss Cuba’s response to Covid-19 in the education sector and the role teaching unions have played during the crisis and in plans to get children back to school. She will also look back on 25 years of solidarity between the National Education Union (NEU) in Britain and the National Union of Education, Science and Sports Workers (SNTECD) in Cuba.

Hosted jointed by the National Education Union and the Cuba Solidarity Campaign.