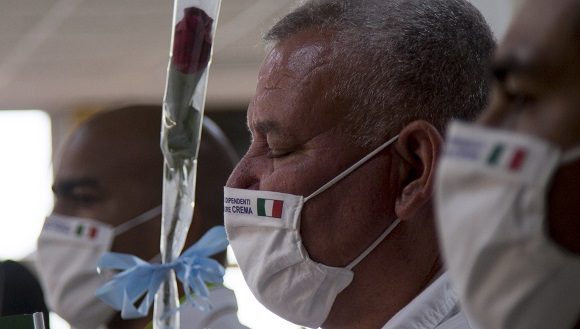 The Cuba Solidarity Campaign has issued a strong statement of condemnation against the latest moves to undermine and smear Cuban medical brigades from the US.

On 17 June, three republican senators – Rick Scott (FL), Marco Rubio (FL) and Ted Cruz (TX) – introduced the Cut Profits to the Cuban Regime Act to the US Senate which aims to punish countries which work with Cuban medical missions. If passed, the Act would list those nations with Cuban medical brigades in the State Department’s annual Trafficking in Persons (TIP) report, unless they complied with US-imposed regulations on how they worked with Cuba.

Cuba currently has 28,000 medical professionals working in 59 countries around the world. Depending on the resources of those countries, the brigades either work free of charge, or the Cuban government receives payment from the host nation. As covered in several articles and interviews with Cuban doctors in previous issues of CubaSí, those who volunteer abroad retain their salary at home which is paid in full to their families while they are away, as well as receiving an agreed percentage of the host nation’s payment. The remainder is used to support medical brigades in poorer nations and Cuba’s health service at home.

The bill is the latest in a series of actions by the US government to discredit Cuban medical missions within the international community, warn off countries from working with Cuba and deprive the island of resources and funding for its own health service.

Bruno Rodríguez, the Cuban Foreign Minister denounced the move as a “desperate manoeuvre by anti-Cuban senators against Cuba’s international medical cooperation which threatens to penalise those who do not follow the isolated and reproachable US government’s behaviour. Cuba saves lives. They can’t erase that truth.”

The Cuba Solidarity Campaign released a statement in June condemning the “ongoing campaign by the US government to undermine Cuba’s international medical cooperation programmes.”

“Such threats to humanitarian assistance from one country to another are an affront to people across the globe, and particularly repugnant during an international health pandemic which has killed more than half a million people,” it said, and continued: “In the last week, Britain has cooperated with Cuba to support the posting of two Cuban brigades to the British overseas territories of Anguilla, and the Turks and Caicos Islands. On 26 June the British embassy in Havana tweeted that the British government ‘appreciated the Cuban medical assistance to fight the pandemic in our overseas territories’.

“During a global health crisis, Cuba’s life-saving missions are an example of humanitarianism that the world can learn from. Such international cooperation should be encouraged and praised, not undermined and slandered as the US senators’ bill desperately seeks to do.

“The Cuba Solidarity Campaign welcomes the UK Government support for Cuba’s international missions. We support the right of Cuba and other countries, including the UK, to cooperate with such international medical programmes, and indeed any other projects that they choose, without the threat of sanctions from the United States which are a blatant attempt to strangle the Cuban economy.

“We will continue to fight against any attempts to undermine international cooperation in health and other sectors, and we call once again for an end to the inhumane US blockade,” it concluded.