MEETING: Bay of Pigs 60 - celebrating 'the first defeat of imperialism in America' 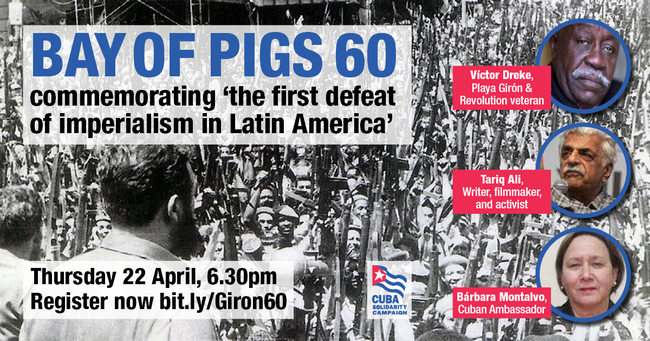 Or register to watch on zoom here

On 17 April 1961, Cuba defeated a US-backed invading force at the Playa Giron. The Cuban victory at the Bay of Pigs (as it is known in English) marked the ‘first defeat of imperialism in America’.

Since then, Cubans has been forced to defend their Revolution against an onslaught of attacks planned, financed and orchestrated from US soil. From biological warfare and bombing campaigns to the covert funding of US backed opposition and scurrilous propaganda against their medical brigades, the island has faced ongoing aggression underpinned by six decades of economic warfare in the form of the all pervasive and illegal blockade which causes shortages in hospitals and schools.

Speaking on at the May Day rally just a few weeks after the invasion attempt, Fidel Castro dismissed the notion that socialism threatens US security. He declared: “What threatens the security of the US people is the aggressive policy of the warmongers of the United States. What threatens the security of the North American family and the US people is the violent, aggressive policy that ignores the sovereignty and the rights of other peoples”.

Join our speakers to mark the 60th anniversary of the Cuba’s victory at the Bay of Pigs as they recall their personal experiences of the event itself, and look at how US imperialism and intervention in Cuba and Latin America is as pernicious today as it was in 1961.

Victor Dreke fought in the Cuban Revolution alongside Che Guevara, commanded two companies of Cuban forces at the Bay of Pigs, where he was wounded and briefly captured, and was second in command to Che Guevara in the Cuban training mission to the Democratic Republic of the Congo. Guevara wrote about Dreke in his report to Fidel Castro: "He was... one of the pillars on which I relied. The only reason I am not recommending that he be promoted is that he already holds the highest rank." He is vice president of the Cuba-Africa Friendship Association and a member of the Association of Combatants of the Cuban Revolution.

Tariq Ali is a renowned radical writer and activist, editor of New Left review and author of numerous books on history and politics, including the introduction to ‘The Declarations of Havana’ on the relevance of Fidel Castro’s anti-imperialist message today.

Bárbara Montalvo Álvarez has been Cuban Ambassador to the UK since February 2020. Previously she was Chief of Staff in the Cuban Foreign Ministry, working closely with Foreign Minister Bruno Rodriguez, and before this served as ambassador to the Czech Republic. Her father was a combatant at the Bay of Pigs.

“Cuba will continue to struggle in this world for peace. We created a socialist revolution under the noses of the empire and we will defend it. When Cubans go to other countries we are all volunteers. We don’t go to steal petrol or destroy a people’s dignity. We go in defence of dignity and the right to freedom and a better life.”

Victor Dreke, speaking at a rally to mark the 50th anniversary of the Bay of Pigs.