Cuba Solidarity Campaign statement against US intervention in Cuba 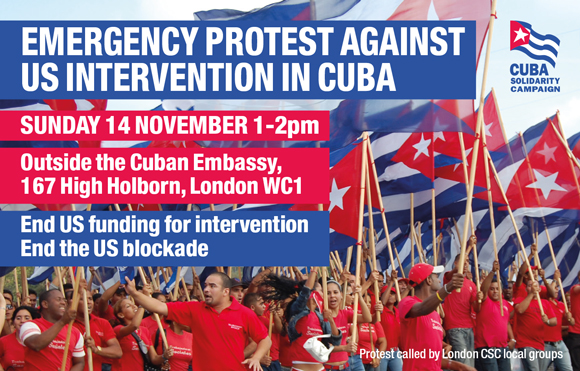 The Cuba Solidarity Campaign condemns the actions of individuals, groups and governments that are attempting to destabilise Cuba by supporting, financing and co-ordinating protests around the world, and in Cuba itself, from 14-15 November.

The US government has escalated its involvement with, and funding for, opposition groups both on and outside the island, and is openly supporting anti-government protests in Cuba. Pro-blockade US politicians and right-wing Cuban American groups based in Florida are pushing for increased sanctions and calling for further US action, including intervention. While they claim to want to help the Cuban people, they support the tightening of the US blockade – a policy which is directly responsible for shortages of food, medicines and basic necessities for all Cubans, especially the most vulnerable. The blockade has been condemned by the United Nations General Assembly in 29 consecutive votes.

These latest aggressions are a continuation of the 60-year US policy of economic warfare intended to starve the Cuban people into submission and create unrest and overthrow of the government. In July the mainstream media widely reported on protests in Cuba which arose initially as a result of an economic and health crisis caused by the tightening of the blockade and the impact of the COVID-19 pandemic. However, little was reported on the role of US-based politicians and groups in promoting and exploiting these events.

Following the July protests the Biden administration called Cuba “a failed state” due to its COVID-19 rates and offered to supply the island with vaccines, provided they could be administered by ”independent” (ie non-state) organisations. This offer was disingenuous and hypocritical given that just months before the US blockade had exacerbated the pandemic and cost lives in Cuba by preventing the delivery of emergency medical aid including ventilators, testing kits and masks. Many countries and international organisations, called for a genuine humanitarian response starting with an end to the US blockade. The international development agency Oxfam said that US sanctions “represented a real obstacle to the procurement of mechanical ventilators, face masks, diagnostic kits, reagents, vaccination syringes, and other necessary materials to address COVID-19.”

Despite these obstacles, Cuba managed to develop its own successful vaccines against COVID-19 and had fully vaccinated almost 70 per cent of its population by 9 November. Its schools also reopened for face-to-face lessons with all children aged 2-18 years fully vaccinated – an amazing achievement for a low income country under cruel sanctions. In contrast, the US stood at less than 60 per cent by the same date, despite starting its vaccination programme months earlier and having significantly more resources.

Although the July protests in Cuba were small, especially when compared to the pro-government rallies which followed, right-wing US politicians and their supporters have seized the opportunity to promote a ‘soft coup’ attempt. They are now supporting protests called for 15 November in Cuba and several cities across the world, including London. The Biden administration has also expressed its support for anti-government groups and demonstrations. It is inconceivable that any country would tolerate such direct interference by a foreign government in its domestic affairs. Yet Cuba is demonised for acting and speaking out against such actions.

The US government spends millions funding anti-Cuban projects and opposition groups every year. Some grant recipients are clearly named on US government websites, but others are kept secret. In the last two months the US government has awarded almost $7 million to twelve organisations for projects to destabilise and undermine the Cuban government. These twelve groups alone are set to receive $18 million over the next three years (an amount Cuba solidarity groups could not come close to matching over three decades let alone three years!).

There is clear and mounting evidence of misinformation, direct US funding and interference, and support from individuals and groups with a history of violence against Cuba in planning or promoting events for November. CSC has compiled an extensive alternative media archive detailing such activities in the run-up to the November protests and the background to the 11 July protests which can be read here.

The Cuba Solidarity Campaign calls on the US government to end its six decade campaign of economic warfare and aggression against Cuba. We support the Cuban people’s right to determine their own future, free from external attempts to destabilise the country and US intervention. We will continue to fight for an end to the inhumane US blockade which shamefully enters its 60th year in 2022.

On Sunday 14 November the Cuba Solidarity Campaign will hold a rally outside the Cuban embassy in London to protest against US intervention. The protest will highlight the escalation of US government involvement with and funding for opposition groups both on and outside the island. It will call for an end to US aggression and an end to the US blockade which has caused hardship and suffering in Cuba for almost 60 years. If you are able, please join us at the rally in London from 1-2pm on Sunday 14 November. If not, please support the event publicising it, together with this statement to family and friends, and sharing our social media posts on the day. If you would like to organise something in your area to raise awareness about the situation please contact us for information and resources.