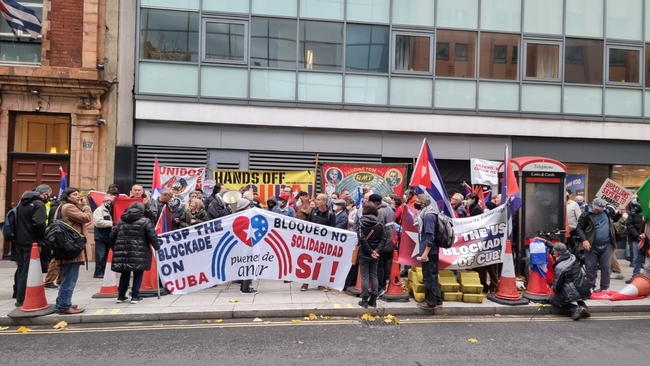 SCORES of solidarity activists rallied to defend the Cuban embassy in London today as rightwingers staged an anti-socialist protest.

US-backed counter-revolutionaries called protests around the world for today and tomorrow, and a handful turned up at the embassy, at one point trying to rush it. But their way was barred by the larger solidarity demo.

Socialists chanted “Hands off Cuba – end the blockade” as the blockade supporters pointed megaphones, with “Made in USA” labels attached, in their faces through police lines, yelling: “Assassins!”

One woman patrolled just behind the police, throwing liquid from a bottle at the solidarity demonstrators.

Cuba Solidarity Campaign director Rob Miller told the crowd – replete with Cuban flags and trade union banners, including that of RMT Paddington No 1 branch – that the US was seeking to exploit protests that took place over the summer caused by shortages as a result of its own illegal blockade.

“But as we can see from the numbers today, we are many, they are few,” he said — “and that’s the same in Cuba, where millions rallied to defend the revolution after the US-orchestrated protests.”

Adrian Weir of the Unite union said resisting the blockade was about “the right to self-determination,” and said there was an urgent humanitarian need to end it. (full speech below)

“Tightening the blockade has meant that even though Cuba has developed its own Covid-19 vaccine, it lacked the means to deliver it — no syringes.”

Alex Gordon, speaking for the Communist Party, pointed out that “millions of State Department dollars” were funnelled into anti-Cuba activities and at undermining other left governments in the region including Nicaragua’s, with social media giants like Twitter and Facebook acting to censor socialist voices by suspending and deleting pro-Cuba and Nicaragua accounts.

The crowd cheered as a car with the numberplate “Fidel” cruised past, honking its horn. But the anti-Cuba activists continued to try to drown out the speakers, including by holding aloft a sound system blaring out loud music just behind police lines.

The National Education Union sent greetings (below), and the demo was addressed by speakers from the Young Communist League, Indian Workers’ Association, Nicaragua Solidarity Campaign Action Group, Cubans in the UK and the Morning Star.

Read the Morning Star editorial Support the Cuban people? then fight the blockade

Speech by Adrian Weir, Asst Chief of Staff at Unite.

Good afternoon comrades and friends.I bring to this rally the solidarity greetings of General Secretary Sharon Graham and the whole of the Unite Executive Council.

Friends, those of us here today are part of global movement this weekend – all around the world rising up with one voice – no US intervention in Cuba!

I’m sure many of you know that it was 60 years the US started its illegal blockade of Cuba.Yet in the face of this monstrous attack by the US the Cubans have built a socialist society that they are seeking to defend.They have that right – a right to self-determination.

In the 21st century we have seen seismic shifts across Latin America with the left coming to power particularly in Venezuela and Nicaragua but also elsewhere - Bolivia and Ecuador are good examples.Our comrades in these countries always say that Cuba is their inspiration, their beacon.

If the US couldn’t break Cuba it US has been active in deposing Evo Morales, Lula and the others; in fact they’ve being doing this since at least the 1950s.The coronavirus pandemic has changed the game, however.The US under Biden is now playing hardball in not relaxing the new restrictions imposed by Trump.Tightening up the blockade has meant that even though Cuba has developed its own Covid-19 vaccine it lacked the means to deliver it – no syringes.

The US blockade meant that vital medical supplies and drugs could not get through to the island.The pandemic has made a bad situation – shortages due to the blockade – even worse – lack of medical supplies.The US says that it would supply vaccines but only through a “humanitarian corridor.” Clearly a cover for US intervention in Cuba.

The Cubans have the necessary infrastructure to deliver medical help to where it’s needed they just need the blockade lifted to let in the necessary supplies.As events have turned out Cuba has acquired the syringes and has now vaccinated 70% of the population.

Not let a good crisis go to waste the US has been funding and training the worst of the counter revolutionary elements in Cuba and Florida.Instead of a full frontal invasion as at the Bay of Pigs they are now going for a soft coup.

The fully trained right wingers will invent or infiltrate social movements campaigning for change and will claim a monopoly on the process of change.They are not be interested in dialogue with the Government but will seek to replace the Government, the US is only interested in regime change.

But comrades, no matter what the main stream media will report the counter revolutionaries are not in the majority.There will be mobilisations through the CDRs the unions, and the women’s organisations that will dwarf what the right wing will be able to manipulate to appear on the streets.

The majority will defend the gains of the Revolution – it is with those we must stand.

For a quarter of a century, the NEU has had excellent working relations with the Sindicato Nacional de los Trabajadores de la Educación, la Ciencia y el Deporte (SNTECD), the Cuban Teachers’ Union. Indeed for more than five years, representatives from the SNTECD have been invited to our annual conferences in April; and every October, during half term, the NEU send teachers to Cuban schools. These teachers have the opportunity to ask any questions to teachers, students and parents alike. They come back and share their experience with colleagues in their respective NEU districts, and most often, become active members in the Cuba Solidarity Campaign (CSC).

In October 2017, the NEU teachers took Braille machines to the Abel Santamaría School in Havana for the visually impaired students. And because these machines are US made, Cuba is unable to buy spare parts because of the illegal and criminal blockade imposed on Cuba by the USA. The school is located in Ciudad Libertad which used to be military barracks. Now it is home to primary, secondary, special and university institutions.

In 2018, the report of the NEU teachers mentioned the fact that the
‘Impact of the US blockade was felt everywhere and many of the resources we saw in classrooms had been made by the teachers themselves’.

Because of the pandemic the NEU has not sent delegations to Cuba, but we hope that the exchange will resume in October 2022. And next year the NEU will launch another campaign of solidarity for Cuban schools.

Cuba spends almost 14% of its GDP on education. Since 1961 with the launch of the national literacy campaign, Cuba has achieved one of the highest literacy rates in the world, being the first country in the Americas to be declared by UNESCO free of illiteracy, on 22 December 1961.

Education must never be a commodity for sale. It is a human right, not a privilege. Cuba understands that civilisation is enhanced by the reduction of ignorance. Cuba puts its people first, not profit!

While the literacy campaign was being carried out Cuba was victim of an aggression from the USA, aggression which took place in the Bay of Pigs, on 17 April 1961, ‘the first defeat of US imperialism in Latin America’.

Now from the 11 July onwards, Cuba faces another planned aggression from the USA. The NEU stands resolutely with Cuba and say loud and clear that the Cuban people should be able to determine their own future, free from intervention from the USA. 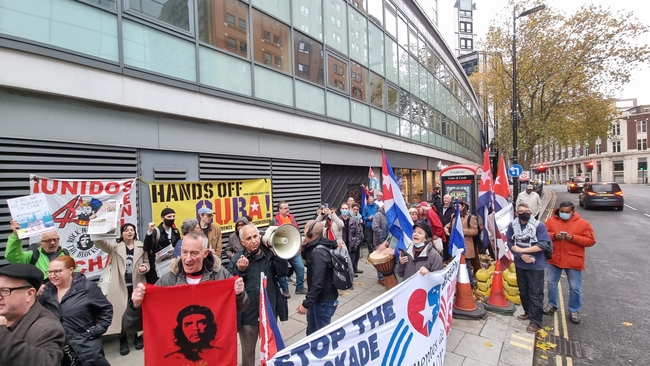 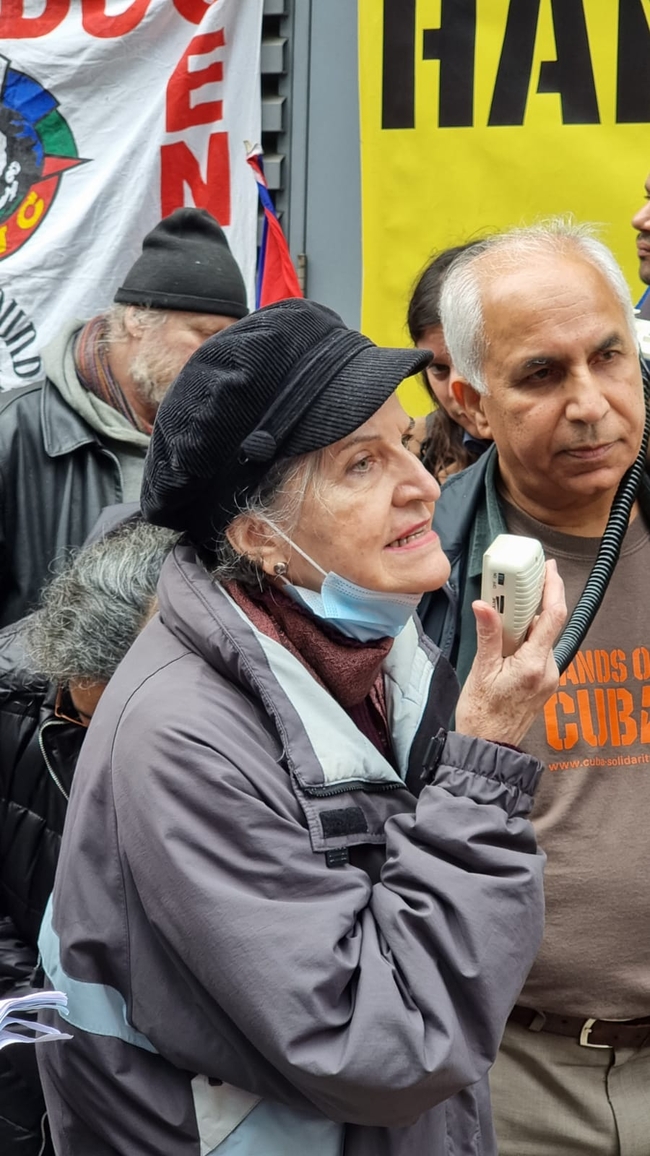 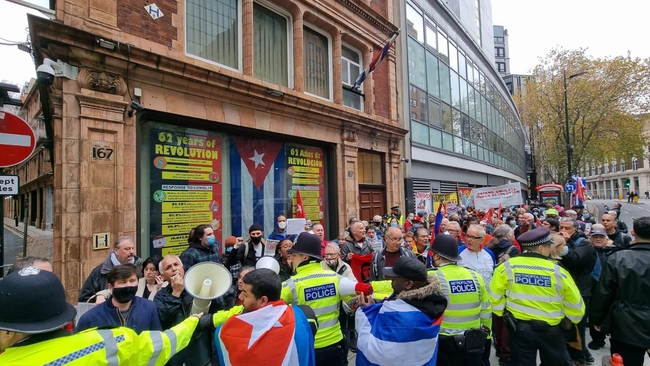