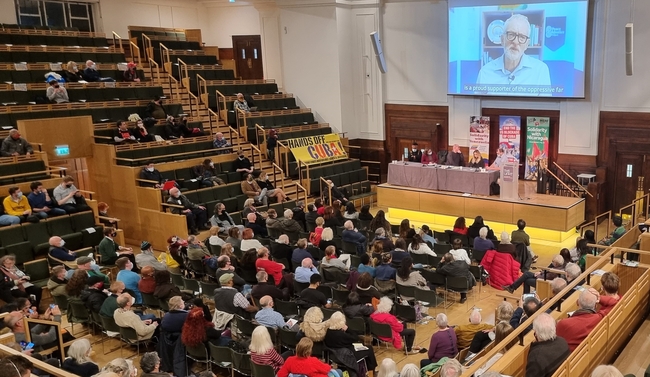 Around 400 activists attended this year’s crucial Latin America Conference at Friends House in London on Saturday after unfortunately having to postpone the event in 2020 due to the on-going pandemic. The conference came at a crucial time for the region with progressive electoral victories in Nicaragua, Venezuela and most recently in Honduras.

As well as attending a range of seminars throughout the day, delegates were also able to browse solidarity stalls from various solidarity campaigns, book stalls and film screenings.

There were over 60 speakers contributing across 21 different seminars providing delegates with exciting insights into the region with expert analysis.

‘Socialists, trade unionists and progressives around the world have been inspired by left election victories across the continent again in recent years - the so called 'pink tide' is back, and with a vengeance.’

“The region has changed, firstly with the arrival of AMLO in Mexico, the construction of progressive governments in Argentina, and Venezuela and Cuba emerging from brutal aggression by the United States”.

Ulises Guilarte de Nacimiento, General Secretary of the CTC reaffirmed Cuba’s fraternal solidarirty with all those in attendance at the conference. He added, “Latin American unity amid diversity, solidarity with countries that today fight battles and whose unions defend the rights of their workers.”

Barbara Montalvo thanked delegates, union activists and the Cuba Solidarity campaign for the wonderful solidarity shown to Cuba and the huge support given through the Covid 19 pandemic.

Jeremy Corbyn MP sent his message by video as he was at an event in Mexico,

“Bolivia’s social change following the defeat of the US and UK backed coup last year is quite honestly an inspiration to us all, and that it is possible to put people and the planet before private profit.”

He concluded by saying, “The left in Latin America is making a difference. Let’s make a difference ourselves by supporting all the solidarity organisations present here today.”

You can watch Jeremy Corbyn’s message in full here.

National Education Union joint General Secretary Kevin Courtney called the Blockade of Cuba
‘the most terrible abuse of human rights going on right now’ he demanded that ‘the US Blockade must be ended’.

A full report of Latin America Conference 2021 will be included in the next edition of Cuba Si magazine.