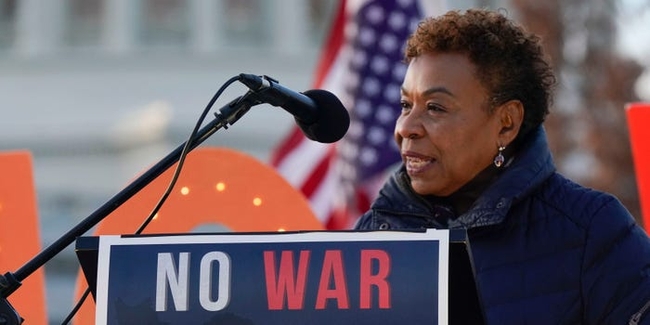 Barbara Lee, one of the letter sponsors

On the eve of the 7th anniversary of the raprochement between Cuba and the US under President Obama, 114 US members of Congress have signed a letter to President Biden calling for a reversal of key measures taken against the island by the Trump administration.

The letter, presented by Representatives James P. McGovern (D-MA), Barbara Lee (D-CA), Gregory Meeks (D-NY), and Bobby Rush (D-IL) calls for immediate action to relieve the humanitarian crisis in Cuba including suspending regulations on food and medicine imports, allowing family visits and remitances, and for Cuba to be removed from the State Sponsor of Terrorism list (SSOT).

The full letter can be read below, or here including all signers.

We are writing to ask you to prioritize the well-being of the Cuban people, who are experiencing the worst economic and humanitarian crisis in recent history. The current humanitarian situation in Cuba is growing ever more dire, with shortages of food and goods and decreasing access to medical supplies amid the COVID-19 pandemic. We urge you to take immediate humanitarian actions – as the United Nations has urged repeatedly – to suspend U.S. regulations that prevent food, medicine, and other humanitarian assistance from reaching the Cuban people. We also support a more comprehensive shift to deepen engagement with Cuba and move towards normalization of U.S.-Cuba relations.

We urge your administration to remove the specific licenses required to send medical supplies, such as testing kits and respiratory devices, to Cuba. We also ask that the administration lift all restrictions on banking and financial transactions related to humanitarian aid and suspend end-use verification. While the embargo allows for the shipment of humanitarian aid, in practice, licensing requirements, end-use verification, restrictions on the banking sector, and fear of unknowingly running afoul of U.S. law severely complicate sending humanitarian aid to Cuba, from other countries as well as from the United States.

We ask you to remove all restrictions on family remittances, allowing Cuban Americans to help their families and improve their standard of living, and the restrictions on non-family (donative) remittances, allowing nonprofits and faith groups to provide humanitarian assistance and start-up capital for Cuban entrepreneurs and civil society. We are still waiting for action based on the recommendations from the Remittance Working Group you established in the wake of the July 11 th protests, tasked with expediting a review withing 30 days of how to send remittances directly to the Cuban people. Despite concerns over Cuba’s government obtaining revenue from remittances, the government captures less revenue from remittances than in the past due to changes initiated in July 2020 and much of the government’s revenue from remittances is channeled to essential food, fuel, and goods imports for Cubans who do not have family abroad, many of them in marginalized communities. Moreover, the U.S. government does not restrict remittances to most of the countries targeted by U.S. sanctions. For example, your administration restarted the flow of remittances through Western Union to Afghanistan, and as of last week, you now allow personal and family remittances through financial institutions, showing 2 you are aware of the importance that remittance channels have for countries facing humanitarian and economic crises.

We also urge you to roll back the Trump Administration’s restrictions on travel to Cuba, since they make it more difficult for Cuban Americans to visit and reunite with family on the island, particularly for those with families outside of Havana. These restrictions limit mutually beneficial dialogue and exchange between the U.S. and Cuban people. Travel restrictions have also harmed small private businesses, which have been unable to access needed goods and products and have struggled since tourism began to slow after such restrictions were put in place. Allowing travel to Cuba would increase the flow of necessary humanitarian supplies to the island and the amount and distribution of money and goods sent directly into the hands of Cubans. Cuba was removed from the State Sponsor of Terrorism list in 2015 after an exhaustive review by experts at the State Department and in the intelligence community. The Trump Administration did not cite any new facts to justify its decision to relist Cuba during the last days of its term. Therefore, we ask you to recommend that the State Department conduct a new review and remove Cuba from the list. This designation places another roadblock in the path towards improved relations and creates further obstacles for purchasing or receiving humanitarian goods.

In addition to these immediate steps, we believe that a policy of engagement with Cuba serves U.S. interests and those of the Cuban people. It should lead to a more comprehensive effort to deepen engagement and normalization, including restarting diplomatic engagement at senior levels as well as through the re-staffing of each country’s respective embassies. This act would not only be a gesture of good faith but is in the best interests of the United States, assisting Cubans interested in migrating via legal means instead of contributing to conditions forcing Cubans to migrate under dangerous conditions, arriving in increased numbers at our southern border. Because the U.S. Embassy’s consular section has been closed to Cubans, the United States is in violation of the 1994 migration agreement signed with Cuba to end the last migration crisis.

Engagement on key areas of mutual interest that were pursued by the Obama–Biden Administration should be resumed, including bilateral groups on migration, disaster response, environment, and law enforcement issues such as counter-narcotics and money laundering. Cooperation on COVID-19 response and addressing future pandemics are also essential.

Finally, protecting human rights in Cuba, including the right to protest, is better served by principled engagement, rather than unilateral isolation, which has proven to be a failed policy. In fact, today, following almost five years of tightened U.S. sanctions, Cuba’s nascent social movements that emerged during the rapprochement years find their space for public debate and free expression more constrained than in 2016. Yet increased channels of communication and access to information via the internet and social media platforms in recent years, in large measure due to the policy of engagement pursued by the Obama-Biden Administration, have dramatically influenced how Cubans communicate and their levels of activism to influence decision making and mobilize and advocate for social causes. Engagement is more likely to 3 enable the political, economic, and social openings that Cubans may desire, and to ease the hardships that Cubans face today.

We are eager to work with you to advance U.S.-Cuban relations and human rights and prosperity on the island. We look forward to your rapid implementation of these recommendations.