Cuba has been under US embargo for 60 years. It’s time for that to end 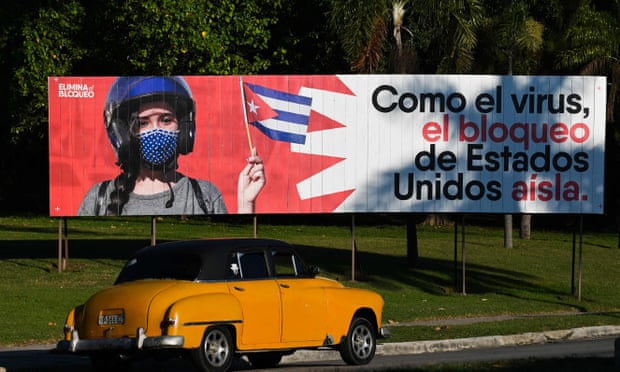 There is no embargo on Cuba.” This bold claim – made by Florida senator Marco Rubio on the floor of the US Senate last July – has quickly hardened into conventional wisdom across aisles of US Congress and among Rubio’s base of support in the Cuban diaspora. The US blockade is a myth, a bogeyman for the Communist party of Cuba. “Cuba is not isolated,” Rubio said. Those who say otherwise either “don’t know what they’re talking about … or they’re liars. Those are the only two options.”

Here in Havana, though, the isolating effects of the US embargo are impossible to ignore. The docks are half-empty: the US has banned all cruise ships, cultural exchange and educational delegations that once drove the largest industry on the island. The Western Union branches are shuttered: the US has banned all remittances through Cuban firms and their affiliates to the millions of Cuban families that rely on assistance from abroad. The hospitals are understocked: the US embargo has forbidden the export of medical technology with US components, leading to chronic shortages of over-the-counter medicine. Even the internet is a zone of isolation: the US embargo means that Cubans cannot use Zoom, Skype or Microsoft Teams to communicate with the outside world.

In short, the US embargo impacts every aspect of life on the island – and that is the precisely the point. Sixty years ago on this day, President John F Kennedy introduced Proclamation 3447, Embargo on All Trade with Cuba, designed to isolate Cuba and stop the spread of so-called Sino-Soviet Communism “Every possible means should be undertaken promptly to weaken the economic life of Cuba,” the assistant secretary of state, Lester D Mallory, wrote in an April 1960 memo. The goal of the Kennedy administration was clear: “To bring about hunger, desperation and overthrow of government.”

Today, Joe Biden lives up to Kennedy’s legacy and the ambitions of his Cuban embargo. Not only has the president refused to undo the extraordinary sanctions imposed by the Trump administration, reneging on his campaign promise to restore diplomatic relations and leaving Cuba on the list of “state sponsors of terrorism”. He has also doubled down on the embargo, tightening restrictions and imposing a host of new sanctions against the Cuban government.

Both the Biden administration and its Republican opposition claim that these measures are targeted at the regime, rather than the Cuban people. But the evidence to the contrary is not only anecdotal. The UN estimates that the embargo has cost Cuba over $130bn in damages – costs that are compounded by the penalties imposed by the US Office of Foreign Assets Control (OFAC) on Cuba’s allies and investors. Between April 2019 and March 2020 alone, OFAC penalties amounted to over $2.4bn, targeting banks, insurance firms, energy companies and travel agencies alike.

The effect of the embargo is therefore both local and global: it cripples the Cuban economy and undermines the multilateral system that the US claims to lead.

The UN Food and Agriculture Organization (FAO) reports that the embargo has had a “direct impact” on its operations in Cuba, citing costs, losses and damages that have resulted in drastic reduction of agricultural output on the island – despite the fact that FAO is “officially exempted” from the embargo.

The UN development program (UNDP) cites its own challenges in the implementation of projects like its Global Fund to Fight Aids, Tuberculosis, and Malaria in Cuba – in particular, when Toyota Gibraltar Stockholdings was forced to cancel the supply of vehicles to the UNDP office as a result of tightened US restrictions in 2018.

And the UN Environmental Program (UNEP) highlights the ways in which the US embargo “not only affects that Caribbean country but also the subregion and the United States itself”. According to the UNEP, the embargo “eliminates” the possibility of regional cooperation on environmental issues and prevents the diffusion of critical technology to drive a green transition on the island.

Critics of the embargo often rely on moral claims to make their case. It is no doubt a strong case: by its own admission, the US aims to “starve” the island of Cuba, and it is succeeding. The US coast guard reports that 586 Cubans have attempted to cross the ocean in the first fiscal quarter of 2022 alone, but the US government – despite its clear intention to inflame outward migration – refuses to welcome them. “Allow me to be clear,” the homeland security secretary, Alejandro Mayorkas, said to Cuban migrants, “if you take to the sea, you will not come to the United States.”

But a much broader buffet of arguments is on offer to challenge the Cuban embargo on the occasion of its 60th anniversary. One is legal: Biden has called to “defend the liberal international order”, but his embargo clearly violates the UN charter and the international law it enshrines. Another is geopolitical: for the 29th consecutive year, members of the UN general assembly have voted to end the embargo by an overwhelming vote of 184 to two; with US hegemony on the wane, it can little afford such a flagrant display of unilateral force. And still another argument is democratic: 57% of US voters support lifting the embargo, while only 29% oppose; by enforcing the embargo, Joe Biden has allowed a minority of ageing defectors in southern Florida to dictate the foreign policy of an entire administration.

Most of all, though, the embargo fails the test of its own logic. In its comments to the UN general assembly last year, the Biden administration argued that the embargo aims to “support the Cuban people in their quest to determine their own future”. But the Biden administration does not dare to explain how making Cuba poorer, sicker and more isolated supports their quest for self-determination. It is a cornerstone of US foreign policy that growth, wealth, and international integration are pathways to freedom. “Starving” the island of Cuba, then, sounds more like administering torture than paving the way to freedom.

In his speech on the Senate floor, Marco Rubio argued that the US embargo is just a scapegoat for the communists of Cuba, a “talking point” for the regime. If that is the case, then, why not lift the embargo and take the talking point away? If communism is a failed system, then why not let it fail on its own terms, and let Cubans see for themselves the true face of their revolution? What is Marco Rubio so afraid of? If we are committed to supporting Cubans’ “quest to determine their own future”, then there is only one way forward: end the embargo, and let Cuba finally live.

David Adler is the general coordinator of the Progressive International

60 YEARS TOO LONG - END THE US BLOCKADE
Reverse Trump’s sanctions, engage with Cuba, and end the US blockade.

Sign our open letter calling on President Biden to stop suffocating the Cuban people by ending the inhumane US blockade which enters its 60th year in February 2022.