Cuba–US relations: Obama to Trump to 2020

Canadian author and academic, Arnold August, looks at recent developments in Cuba-US relations and the prospects for improvement under and beyond Donald Trump 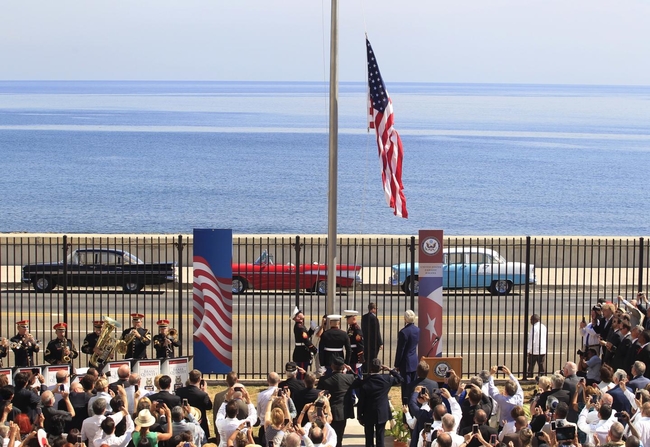 The US flag raised in Havana, marking the re-opening of the US Embassy in summer 2015

On 17 December 2014, the world witnessed the simultaneous surprise announcements by presidents Raúl Castro and Barack Obama to re-establish diplomatic relations between Cuba and the United States after more than five decades.

However, some floated the fallacy that this decision represented a huge step toward “normalisation.” On that day, Obama himself claimed that the move was intended to “begin to normalise relations between our two countries.” Nevertheless, as historic as this decision was regarding the reopening of the respective embassies, it did not at all mean that the path was in fact toward normalisation. It was nothing of the sort.

Since US foreign policy is inherently interventionalist: striving for the imperialistic world hegemony of capitalism, can one expect miracles from its Cuba policy? After all, Cuba, more than any country in the world, epitomises in words and in deeds with the Cuban Revolution the resistance to such imperialism.

The only “miracle” was that the remaining Miami Five were returned home to Cuba from US jails. However, this was as a result of Cuba’s principled negotiating position and the efforts of activists and progressive forces in Britain and elsewhere in the world.

In fact, reestablishing relations was the easy part. At the time I recalled the public statement Fidel Castro made to his followers on 8 January 8 1959, just eight days after the triumph of the Revolution:

“This is a decisive moment in our history: The tyranny has been overthrown, there is immense joy. However, there is still much to be done. Let us not fool ourselves into believing that the future will be easy; perhaps everything will be more difficult in the future.”

But just how generous was the Obama Cuba policy in its “thaw” with Cuba? Before delving into the dangers on the horizon, it must be said that it was very positive. Moreover, the Cubans deftly took advantage of this in many ways (trade/commerce, tourism, bilateral agreements on contentious issues for Cuba and the U.S. and other developments), in addition to freeing the remaining members of the Miami Five.

Obama indicated that the United States considered its Cuba policy a failure because it did not achieve US goals, among others, of bringing “democracy" to Cuba or of nudging Cuba toward an “open economy” (market economy or capitalism). Nor did the policy succeed – indeed, it backfired – in its objective of isolating Cuba from the rest of Latin America. Consequently, the United States was forced to change its tactics to achieve the same historic goal of bringing the changes to Cuba and increasing its dwindling influence in what it considers to be “its backyard.”

Despite his executive powers to do so (and the Democratic Congressional majority in his first term), he did not close the prison in Guantánamo or return the territory to Cuba. His administration practically outdid all his predecessors in the allotment of funds for CIA-backed subversive “democracy promotion” programs in Cuba. On this point, recently released documents indicate that a massive amount of US CIA-backed funding took place in the years 2014–2016. This, it must be recalled, took place while the Obama administration was negotiating diplomatic ties with Cuba and even after the publicly announced new Cuba policy. At the same time the United States aggressively enforced the extraterritorial application of the Blockade fining 49 international companies an incredible $14 billion US dollars for trading with Cuba. Rightly, many Cuban authorities and commentators were asking what kind of ‘normalisation’ this was ?

Obama visited Cuba in 2016 to crown his signature foreign policy legacy. There then followed a string of high profile US celebrity visits and the Rolling Stones played an historic concert in Havana. Flying in the face of reality, the illusion of “normalisation” persisted.

Fidel passed away a year ago on 25 November, only a few weeks after Trump’s unexpected victory in US elections. The new Trump administration ushered in a change from Obama’s seductive policy toward a more hostile, aggressive narrative coupled with corresponding measures to tighten the blockade while maintaining diplomatic relations as the main feature of the Obama opening.

In the context of Trump’s Cuba policy, the tenets of the “normalisation” myth – emboldened by the virtual across-the-board majority opposition in the United States and abroad to the Trump Cuba policy – have doubled-down in promoting the myth of “normalisation” under Obama. Taking advantage of the fact that Obama looks so immaculate compared with Trump on Cuba, who would dare to argue that Obama did not desire the “normalisation” for which he took the first step?

But does this matter now that Trump has come to power and revealed his Cuba policy? Yes, because immediately after the presidential elections, across-the-board opposition by Republicans, Democrats and trade/commerce/travel businesses at the national, state and city levels to any Obama policy rollbacks hit a fever pitch. To what extent? By 17 December 2017, Trump also joined the “normalisation” illusion by saying, “Hopefully everything will ‘normalise’ with Cuba, but right now, they are not doing the right thing. And when they don’t do the right thing, we’re not going to do the right thing. That’s all there is to it.”

Was he feeling the pinch? One cannot underestimate the opposition to Trump. Yes, even the haughty Trump has to take this into account. This prognosis, however, is hedged with a “protection clause,” which any serious observer must do in monitoring the most unorthodox American president in history: Trump is unpredictable.

Here are some points to take into consideration in explaining what may seem to be an about-face on “normalisation” from the president who supposedly staunchly opposes it.

First, despite all the bombastic rhetoric, Trump did not follow the Miami Republicans’ demand to break diplomatic relations with Havana and shut down embassies there and in Washington, even though the staff in Havana is presently only skeletal as a result of the “sonic attacks” pretext. Thus, discussion and negotiations on matters of bilateral concern still carry on both in Havana and Washington. In addition, there is a steady stream of US business people visiting Cuba to work out potential business deals.

Second, the irony of the Trump policy is that the Obama democracy promotion programs have been apparently scaled back, as the new president appears to prefer the option of subverting the Revolution from the outside rather from within. There are people busy in Miami and Washington acting as lobbyists to hitch themselves to the Trump administration should he modify some policies or waiting in the wings for 2020.

What are the prospects for post 2020 relations? Relations could well improve. All Cubans desire this, while the majority of US citizens, even in Florida, and a very wide section of political and economic interests across the country are fighting not only to maintain better relations, but to fully lift the anachronistic and unjust blockade.

The worse-case scenario for 2020 is that Trump wins again. However, by that time the investigation into Russian “meddling” may be over and thus Trump’s necessity for Marco Rubio’s protection on the Congressional Senate Intelligence Committee will no longer be a factor. Rubio can be dumped.

In addition, Trump must take into account the powerful anti-blockade forces in order to win. For example, the Midwest agriculture-exporting states who voted for Trump in 2016 have since publicly expressed a strong desire to continue and increase trade with Cuba. No less than the key state of Texas, Republican dominated, is a strong advocate of trade with Cuba, Houston being the closest US port to Havana. Tampa, Florida is at the forefront of the pro-Cuba trade lobby, and officials and newspapers even favour the complete lifting of the blockade. Trump must watch his flank to make sure that these forces do not swing to the Democrats in 2020. In fact, his 17 December 2017 comment cited above may be interpreted as a first step in that direction.

If the Democrats win, we may, of course, witness the return to the Obama Cuba policy, which would also benefit Cuba. At the same time, a return to the Obama policy could also mean a resurgence of the subversive democracy promotion programs and, by their very nature, interference from within. This will be conveniently camouflaged by the “normalisation” smokescreen. In fact, in 2020, those on both sides of the Straits of Florida who contribute to the normalisation myth may shout, “We won!” Thus, a return to the Obama policy will be coupled with an unprecedented offensive against Cuba’s socialist culture for Cuba to “change” to be as “reasonable” as Washington.

However, the Cuban Revolution will resist this new onslaught, as it has done in the past, while pressuring the US – with the peoples and governments of the world – to lift the blockade. If the blockade is lifted, does this mean that the US will no longer try to interference in Cuba’s internal affairs? The answer is a resounding no. From the US point of view, “normal” relations are completely compatible with interference.

Arnold August is a Canadian journalist and lecturer, is the author of Democracy in Cuba and the 1997–98 Elections, Cuba and Its Neighbours: Democracy in Motion and the recently released Cuba–U.S. Relations: Obama and Beyond.

Canadian author and Cuba specialist,Arnold August is on a speaking tour of Britain in May/June 2018. He will be visiting over 15 CSC local groups to speak on Cuba – US relations from Obama through to Trump, and Cuba’s future post Raúl Castro, who is standing down as president following the April 2018 Cuban general election.