Latin America Demands End to 'Criminal' US Blockade of Cuba 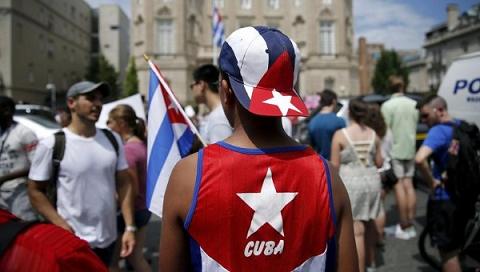 Latin American leaders have welcomed Monday's formal restarting of relations between Cuba and the United States, after decades of hostility that has frustrated the region.

“We reaffirm our solidarity and unconditional friendship with the Cuban people and government,” said the 11-nation ALBA bloc. The regional organisation described the resumption of ties between Cuba and the United States as an affirmation of Cuba's revolution.

“We strongly believe Fidel (Castro) and his people are on the right side of history,” the regional pact said in a statement.

Monday's events saw the United States and Cuba exchange embassies for the first time in half a century. The formal restarting of ties between the two countries should be followed by the dismantling of the U.S. blockade against Cuba, according to Venezuelan President Nicolas Maduro.

“Now (it's time) to fight to lift the criminal blockade against Cuba, and to overcome the (U.S.) interference in our independence-loving region,” said Maduro, the successor to ALBA's founder, former Venezuelan president Hugo Chavez.

The head of Ecuador's National Assembly, Gabriela Rivadeneira, welcomed the reopening of embassies in Havana and Washington as “one more step towards justice in our America,” while Chile's foreign ministry said it was “satisfied” with the move.

Bolivian representative to the Organisation of American States Diego Rodriguez praised the opening of the Cuban embassy in Washington as a “historic act,” and the Caribbean's most influential newspaper, The Jamaica Observer said the event redefined the relationship between Cuba and the United States.

The U.S. embassy in Cuba issued a statement saying that the two countries have officially restored ties with the reopenings. “In accordance with President Barack Obama's announcement on July 1, effective today the United States and Cuba have re-established diplomatic relations.”

The statement read, and added that the Secretary of State John Kerry will travel to Havana later this summer to celebrate the “rise of the flags.”

The Cuban government, of President Raul Castro, has reiterated that in order for there to be an actual normalisation of relations between both countries, the U.S. needs to urgently lift its illegal five-decade-old economic blockade against the Caribbean nation, and return Guantanamo Bay to Havana.

Cuba has also insisted that Washington end its hostile actions against the island nation, which include illegal radio and television broadcasts to the country, with the aim of destabilising its government, as well as other subversive plans to cause what the U.S. dubs “regime change.”

Last week, Gustavo Machin, a Cuban Foreign Ministry official, warned the U.S. may still be attempting to remove the Cuban Communist Party from power, in spite of a public promise from President Barack Obama to move away from the policy of regime change. “You have to appreciate the words of the president ... but you also have to see what happens in practice," Machin, the deputy director for U.S. affairs in the Cuban Foreign Ministry, said during a news conference.