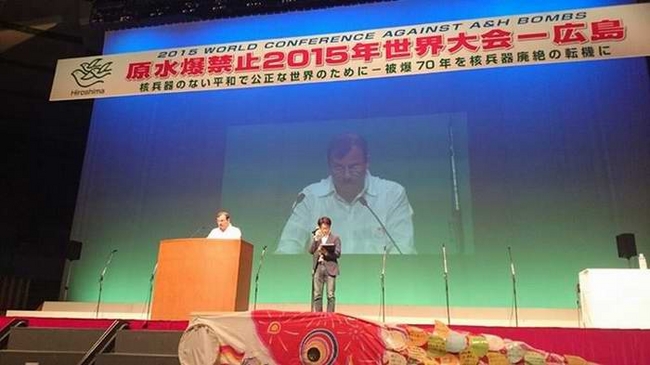 Fernando Gonzalez participated in the events to commemorate the 70th anniversary of the bombing to Hiroshima and Nagasaki.

Tokyo, Aug 6 (Prensa Latina) Fernando Gonzalez, vice president of the Cuban Institute of Friendship with the Peoples (ICAP) and Hero of the Republic of Cuba, participated today here in the events to commemorate the 70th anniversary of the bombing to Hiroshima and Nagasaki.

A statement released by the Caribbean island's embassy in this capital says Gonzalez represented Havana in the official peace commemorative ceremony and took part in the World Conference against the atomic and hydrogen bombs, as marking seven decades of the atomic bombing to Hiroshima and Nagasaki.

After paying tribute to the victims in the official ceremony held at the Peace Memorial in Hiroshima, with the participation of Japanese Prime Minister, Shinzo Abe, and UN High Representative for Disarmament Affairs, Kim Won-soo, among other figures, Gonzalez called for a full, transparent, verifiable and irreversible disarmament.

In front of a massive audience from Japan and elsewhere, delegates from Germany, South Korea and China, among others, also attended the event.

Cuba has been annually represented in this important event, as a recognition to its historic commitment in fighting this destructive armament.

Accompanied by Cuban ambassador to Japan, Marcos Rodriguez, Gonzalez has been developing an extensive program of activities in this country, including meetings with the Japanese Communist Party, lawyers, parliamentarians, and friends of Cuba, especially those who supported the cause of the Cuba Five, from who he is a member.