Embassies in Havana and Washington: A Victory of Diplomacy and Democracy 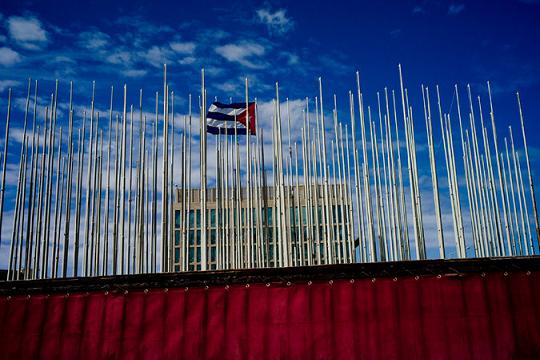 On July 1st, the governments of the United States and Cuba announced an agreement to open diplomatic relations and embassies in Washington and Havana. This is a major watershed in the road to full normalisation of relations between the two states and the two societies. This is also a major win for democracy because the steps taken by Presidents Obama and Castro gives voice to overwhelming majorities in both societies in favor of peaceful and constructive U.S.-Cuba relations.

Let's get history straight. The U.S.-Cuba opening of December 17 was not the product of a few "Johnny come lately" businessmen and lobbyists who recently joined the anti-embargo cause. It was the victory of the Cuban people's nationalist resistance against five decades of an embargo that still is counterproductive, immoral and illegal according to international law. In 1996, the lawyers of the State Department warned Secretary Warren Christopher that the Helms-Burton law would be damaging to U.S relations with its allies, its standing in international law and the promotion of democracy in Cuba.

Together with the Cuban nationalists, there were multiple constituencies in the United States winning the grassroots battle for a change of policy since the 1990s. Particular mention deserves the religious groups of the National Council of Churches, the Black Congressional Caucus, the American left and the Cuban American moderates and progressives who took their cause into the heart of misinformed constituencies indoctrinated in the vision of Cuba as a U.S. national security threat. Cuban-Americans like Carlos Muniz and Luciano Nieves paid for their devotion to good relations between the two countries with their life. After the end of the Clinton Administration, the pro-embargo position went on retreat among libertarians, farmers and business groups in general. The processes of economic reform and political liberalisation launched by Raul Castro's government since 2009 opened the appetites of the American business community. By 2014 politics began to align with a long overdue policy change serving U.S. national interest.

Normalcy is a destiny but normalisation is a journey. After restoring diplomatic relations, Cuba and the United States need to address important claims about the damages caused by the embargo-blockade to Cuba and the nationalisation of American properties without compensation by Fidel Castro's government in the early sixties. It is important to have a conscience with regard to these issues but not allow them to paralyse the agenda of normalisation. Flag raising acts and new diplomatic missions are more than symbolic. They open the gates for substantive relations of respect between the two nations.

The moment calls for a decisive expansion of the Cuban diplomatic personnel in Washington, D.C. to address the growing interest in travelling and knowing more about Cuba from multiple American constituencies. Across the United States business groups, universities, colleges, churches and other social communities are thirsty for information about the optimal way to interact with Cuba. The anti-embargo coalition should not miss this opportunity.

To differentiate themselves from the regime change agenda, American organisations engaging Cuba should subscribe a common declaration of principles committing legally to keep themselves out of any connection whatsoever with the Helms-Burton law funds. Regardless of any difference with the Cuban government, the embargo should be denounced for what it is: a policy that violates the human rights of Cubans and Americans. Some good people traumatised by the abuses and difficulties of the Cuban revolution and the Cold War had supported this wrong policy. By now it is clear that it is a fundamental obstacle to a reconciled Cuba and a better integrated hemisphere.

The opening of a US. Department of Agriculture Foreign Service mission in the new embassy in Havana is urgent. On the road to the 2016 presidential election, the farmer states of the West and the Midwest are going to be major political battlegrounds. It is time that these states commercial and educational engagement with Cuba bear political fruit. The price to pay by pro-embargo politicians on Iowa, Missouri, Colorado, or Ohio should be high. President Obama should use all his presidential authority to dismantle as much of the embargo as possible. All possible legalisation of trade with the state and non-state sectors in Cuba, educational exchanges, and government to government cooperation should be explored. Next September, president Obama can simply stop renewing his presidential power to sanction Cuba under the 1917 Trading with the Enemy Act.

The two countries should also go ahead and designate ambassadors. President Obama should nominate somebody different from Jeffrey DeLaurentis, the current chief of the Interests Section for the post. De Laurentis could be an excellent ambassador. He is a professional diplomat with long experience in Cuba. But he should concentrate on the next months heavy agenda. Since Senators Ted Cruz and Marco Rubio vowed to block any ambassador for the Cuba post, the president should expose their disposition to harm American national interest. Obama should nominate a political figure like Christopher Dodd or Dick Lugar. The two former senators have accounts to settle with the pro-embargo machine and enough political capital. In the worst case scenario, there will be a chance for a recess appointment at the end of the mandate to show the Cruz-Rubio duo the relevance of the presidency.

President Raul Castro should follow the example of big brother Fidel during the Carter Administration. Raul Castro might launch a major initiative to speed up the process of rapprochement with the Cuban American community. The Cuban government should address the legitimate demands of the nationalist emigration who wants to participate and accompany the reforms that are taking place. Some of those changes need to correct some of the root grievances that caused discord within the Cuban nation in the first place. Official barriers and negative attitudes against the émigrés investment in Cuba, and obstacles for Cubans' access to the internet and entrance to their country of origin by sea must end.

The time to dismantle the walls is now. President Obama exhorted Congress to follow up and listen to the well registered voices of the American and the Cuban people against an embargo that kept bilateral relations hostage to the past. He clearly targeted the travel ban when he wondered: "why should Washington stand in the way of our own people?" In the few next weeks, Secretary John Kerry, the architect of this policy change will travel to Havana. The first historic visit of a U.S. secretary of State to Cuba in more than six decades would show a more civil and constructive way to manage American differences with Cuba. The United States is simply measuring up to its commitment to universal values and human rights. As was shown the day before in the White House by Brazil president Dilma Rousseff, the Americas and the international community endorse a U.S. approach that promotes its values and interests in Cuba through engagement not coercion.

As a great power in the context of asymmetric relations, the United States has the opportunity to take some important unilateral dismantlement of hostile structures because it has nothing to risk by doing so. Reciprocity is a useful legal concept for diplomacy but it is politically detrimental in asymmetric relations. Cuba cannot take the United States out of any negative list or give back a naval base in American territory. Similarly Cuba cannot expect deference in its global role as a great power because it is not in such international affairs rank.

It is important to take notice of the intangible complexities of the normalisation process. Cuba and the United States are countries of different size and power but both have strong nationalist pride. Diplomacy, interdependence, respect and self-restraint are key elements for a constructive solution of the almost six decades conflict between them.