The Five on Robben Island: A tribute to Mandela 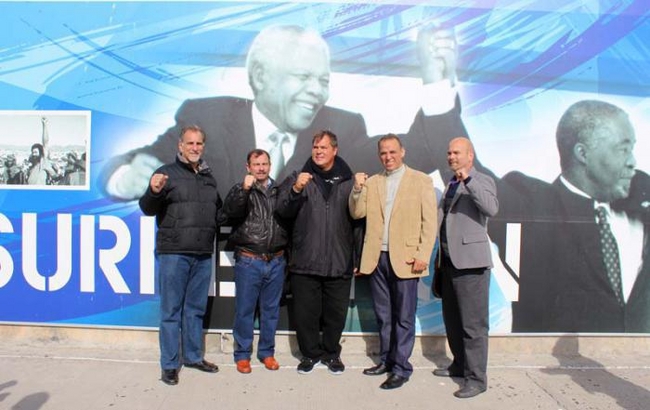 Gerardo, Ramón, Antonio, Fernando and René visited the island where Mandela was imprisoned and paid tribute to his example of the triumph of human spirit over adversity

ROBBEN ISLAND, South Africa.—A sign in English and Afrikaans announces arrival on Robben Island, situated off the coast of Cape Town, a site which encompasses a painful history, thankfully now past for South Africans.

The island of dry sand and strong winds, surrounded by sharp reefs and the unique sound of the thousands of birds that fly overhead, is today a symbol of freedom.

To get there, you have to board a boat at the Nelson Mandela memorial located in the commercial and tourist district of Waterfront.

The journey is about 12 kilometers, a half hour boat ride, enough to reflect on the triumph of human spirit over adversity encompassed by this historical site.

Gerardo Hernández, Ramón Labañino, Antonio Guerrero, Fernando González and René González, the Five Cuban anti-terrorists who themselves were greatly inspired by the spirit of resistance of Prisoner No.46664, Nelson Mandela, during their imprisonment in the U.S., travelled to the island as part of their tour of South Africa.

Mandela spent 18 of the 27 years that the apartheid regime kept him imprisoned on Robben Island.

Accompanied by Ahmed Kathrada, who was also imprisoned alongside Mandela, the Five toured the historical site that was opened as a museum on January 1st, 1997 and declared a World Heritage Site by the United Nations Educational, Scientific and Cultural Organization (UNESCO) in 1999.

Certain areas are usually off-limits to tourists, but Kathrada provided the Five with access to Mandela’s cell, a small, damp and unimaginable space.

They studied the iron bars through which only hands could pass, the blanket on the floor that was all Mandela had for a bed, the bench and a small window.

Each of them looked, touched the walls and tried to take an almost photographic image with their own eyes. It was a private moment of reflection. No questions were required.

Then, as they gathered to take a photo, Fernando noted the date: “Today is June 23. In 2001, 14 years ago, the Comandante en Jefe (Fidel Castro) said we would return (to Cuba).” Meanwhile, Gerardo wrote in the guestbook on behalf of the Five: “It has been a great honour to visit this place together with some of the brave compañeros of Nelson Mandela.”

The message continued, “all of them were a source of inspiration and strength for the Five Cubans to withstand the more than 16 years in U.S. jails.”

Gerardo stressed that this was a legacy that “the Five will honour for the rest of our lives.”

CAPE TOWN.—Members of the African National Congress (ANC) in the South African parliament received the Five during their visit to the legislative capital of the country.

The Deputy Speaker of the National Assembly, Lechesa Tsenoli, said that the Five are an inspiration across the world.

In exclusive statements to Prensa Latina, Tsenoli highlighted the example of resistance that these men provided whilst in U.S. prisons, where they remained confined for an extended and unjust period of time.

The legislator also stressed the contribution of Cuban solidarity to the African cause, a sentiment that is continuously repeated.

Since their arrival on June 21, when they were welcomed by ANC Secretary-General, Gwede Mantashe, the Five have had the chance to talk with the leadership of the Congress of South African Trade Unions (COSATU) and the South African Communist Party (SACP).

They were also warmly welcomed by members of the Society of Friendship with Cuba in South Africa (FOCUS) and the National Association of Democratic Lawyers (NADEL), who did so much to secure their release.

The visit by Gerardo, Ramón, Antonio, Fernando and René will conclude on July 3 and forms part of the celebrations of the 60th anniversary of the Freedom Charter.

According to their busy schedule, they will travel this Thursday, June 25, to the province of Gauteng to complete their tour of five of the nine South African provinces.

The Five then continue on to Namibia and conclude their tour of Africa in Angola, where three of them (Gerardo, Fernando and René) served as internationalist fighters.