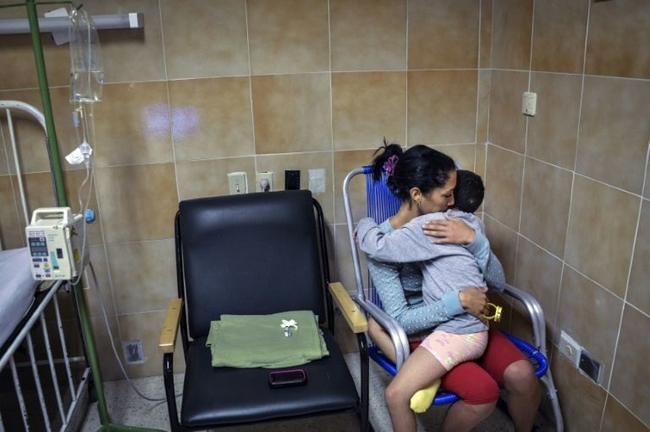 The US embargo on Cuba, which the UN General Assembly formally condemned Tuesday, is not about international politics for Elizabeth Navarro. As far as she's concerned, it's just what keeps her daughter from getting the cancer drug she needs.

That sounds easy enough. But sadly, it isn't, family and doctors say.

Close neighbours but long-time Cold War foes, the United States and Cuba restored diplomatic ties in July after a five-decade standoff, and now are trying to ease economic relations.

The two countries have reopened their embassies in each other's capitals and are engaged in a dialogue to resolve their remaining political differences, but the US trade sanctions in place since 1960 remain.

US President Barack Obama's White House wants to lift the embargo, which prevents almost all trade across the Florida Straits, but conservatives in the US Congress are not ready to forgive the communist island.

The upshot is that the Cuban health ministry has to try to find Noemi -- who has an aggressive form of cancer -- her drug in a third country to get around the sanctions.

"Right now, my daughter is getting radiation therapy. She has had to go through about 27 sessions," said Navarro, 28, drying her tears at her daughter's bedside.

Noemi has been in hospital for two months.

And after a two-week rest following the radiation, she is scheduled for chemotherapy, Navarro explained.

"For us, this is do or die," said her doctor, Migdalia Perez.

"In (Noemi) and other patients with similar microscopic-level tissue conditions, the medication that has managed to boost survival rates in them is temozolomide," said Perez, who has worked for 15 years in pediatric oncology in Cuba, where health care is free of charge.

The girl, whose family is from the south-central province of Cienfuegos, for now is far from home in Havana's Pediatric Oncology Hospital. She spends her days watching videos and playing with a doll, her mother always at her side. She only cries when nurses give her a shot.

About 300 children are treated each year at six cancer facilities around Cuba, a country of 11 million people.

While survival rates for cases like Noemi's are almost 70 percent with the drug she needs, they are not quite 20 percent without it, her doctor stressed.

"Unfortunately, due to the US sanctions in place, as we all know, we have not been able to buy it directly from where it is produced," said Perez, noting that third-party purchases become a must for these kids' care.

The UN General Assembly voted overwhelmingly Tuesday to adopt a non-binding resolution calling for the end of the embargo.

The assembly has adopted a similar resolution each year since 1992, highlighting Washington's isolation over its Cuba policy.

The United States and Israel were the only countries to vote against this year's text, which received a resounding 191 votes in the 193-member assembly.

The government of the Americas' only one-party Communist country blames the sanctions for most of the island's economic woes.

The Cuban government calls the US embargo a "blockade" and estimates it has caused damages of more than $830 billion.

Exceptions in the policy allow US food exports to Cuba, but the island nation struggles to obtain medicines and medical machinery and supplies.

Cuban companies make about 65 percent of the medicines the country needs. But that leaves out many Cubans.

"It is truly tough to treat disease when you have your hands tied," said Dr. Perez.