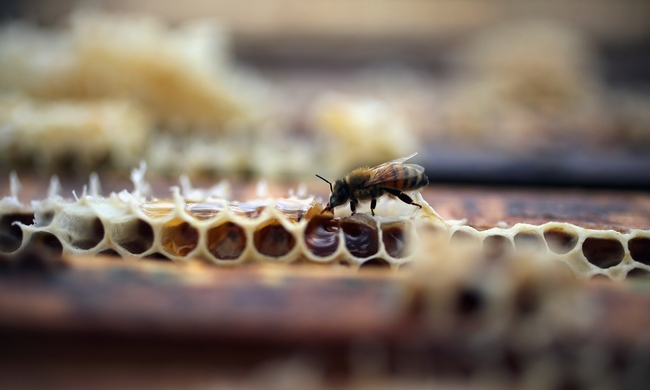 Long known for its cigars and rum, Cuba has added organic honey to its list of key agricultural exports, creating a buzz among farmers as pesticide use has been linked to declining bee populations elsewhere.

Organic honey has become Cuba’s fourth most valuable agricultural export behind fish products, tobacco and drinks, but ahead of the Caribbean island’s more famous sugar and coffee, said Theodor Friedrich, the UN Food and Agriculture Organisation’s (FAO) representative for Cuba.

“All of [Cuba’s] honey can be certified as organic,” Friedrich told the Thomson Reuters Foundation. “Its honey has a very specific, typical taste; in monetary value, it’s a high-ranking product.“

After the collapse in 1991 of the Soviet Union, Cuba’s main trading partner, the island was unable to afford pesticides due to a lack of foreign currency, coupled with the US trade embargo. By necessity, the government embraced organic agriculture, and the policies have largely stuck.

Cuba produced more than 7,200 tonnes of organic honey in 2014, worth about $23.3m, according to government statistics cited by the FAO.

The country’s industry is still tiny compared with honey heavyweights such as China, Turkey and Argentina. But with a commodity worth more per litre than oil, Cuban honey producers believe they could be on the verge of a lucrative era.

His apiary, down a dirt track in San Antonio de los Baños, a farming town an hour’s drive from the capital, Havana, was built from scratch by employees, Alfonso said.

“There is just a bit of production now, but it can get bigger,” he said, looking at the rows of colourful wooden boxes.

Like other Cuban bee farmers, he sells honey exclusively to the government, which pays him according to the world market price and then takes responsibility for marketing the product overseas.

Most of Cuba’s honey exports go to Europe, he said. He would like to be able to borrow money to expand production, but getting credit is difficult, he said, so for now his team of farmers build their own infrastructure for the bees.

“It’s a very natural environment here,” said Raul Vásquez, a farm employee. “The government is not allowed to sell us chemicals – this could be the reason why the bees aren’t dying here” as they have been in other places.

Bees are worth billions to farmers across the globe, study suggests

While Cuba’s small, organic honey industry aims to reap the rewards of increased trade with the United States, honey producers in other regions are under threat, industry officials said.

Bee keepers in the United States, Canada and other regions have long complained that pesticides are responsible for killing their bees and hurting the honey industry more broadly.

The US Environmental Protection Agency released a study in January indicating that a widely used insecticide used on cotton plants and citrus groves can harm bee populations.

“I don’t think there are any doubts that populations of honeybees [in the United States and Europe] have declined … since the second world war,” Norman Carreck, science director of the UK-based International Bee Research Association told the Thomson Reuters Foundation.

Climate change, fewer places for wild bees to nest, shifts in land use, diseases and pesticides are blamed for the decline, he said.

Because it is pesticide-free, Cuba’s organic bee industry could act as protection from the problems hitting other honey exporters, said the FAO’s Friedrich, and could be a growing income stream for the island’s farmers.

“The overall use of pesticides is fairly controlled, he said. “Cuba has been immune to the bee die-offs [hitting other regions].”