US Has 'No Plans' to Return Guantanamo Territory to Cuba 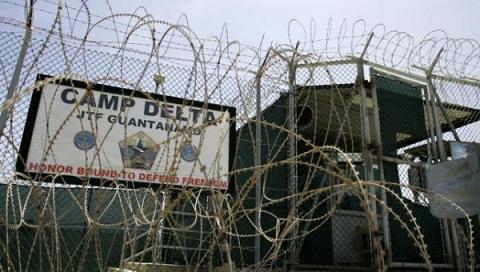 Days after President Obama announced plans to close the controversial prison, Secretary of State John Kerry said the land is not headed back to Cuba.

Despite new U.S. plans to close Guantanamo seven years after President Barack Obama promised to shut down the military detention facility, Secretary of State John Kerry reiterated on Thursday that there is “no plan” to return the occupied territory to Cuba.

“There is no plan, no conversation that I am aware of,” Kerry said to the U.S. House Committee on Foreign Affairs. “I would personally oppose that.”

Cuba has also repeatedly insisted that the U.S. return the naval-occupied territory of Guantanamo as part of the normalisation of relations between the two countries that kicked off in December 2014. While President Barack Obama has planned a historic visit to the island nation next month, Guantanamo will not on his agenda.

Senior Cuban officials, on the other hand, do plan to raise the issue, along with the topic of ending the blockade on Cuba as another condition to the full regularisation of ties.

Obama announced a four-point plan on Tuesday to shut down the controversial military detention facility once and for all, proposing to transfer the remaining 91 detainees away from Guantanamo, including to detention centers in the United States.

President Barack Obama hopes to shut down Guantanamo as one of his final acts in office to fulfill a longstanding promise and solidify the move as one of his legacies.

Human rights defenders have said that while the move to close the military prison is welcome, the plan to transfer detainees who have never been charged to new detention centers does not end indefinite detention, it just moves it to the U.S. mainland.

U.S. Republican critics, on the other hand, argue that Obama’s plan to move former Guantanamo prisoners to U.S. facilities would compromise national security.

Kerry echoed on Thursday statements made by Obama last month saying that Guantanamo has a been a key “recruitment tool” for militant extremist groups.

The military prison at the U.S. naval base at Guantanamo Bay was launched by President George Bush in 2002 in the wake of the Sept. 11, 2001 attacks. Seven years after the facility launched, Obama signed an executive order saying he would close it.

While the thaw in U.S.-Cuba relations since the normalization of bilateral ties since the end of 2014 has been historic, talks are ongoing and diplomatic challenges still remain.

Aside from calling for the Guantanamo territory to be returned to the island, Cuba has repeatedly insisted that the U.S. end the economic blockade against the island and respect the Cuban sovereignty by halting all funding of anti-government groups.