Cuban heroes arrive in the UK for freedom tour 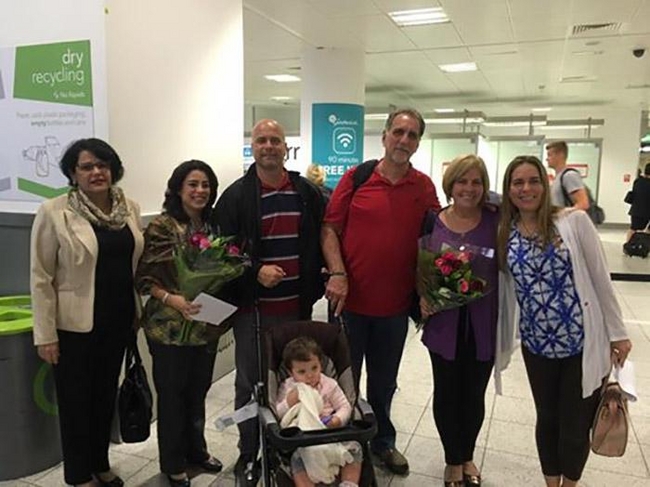 René González and Gerardo Hernández, two of the five Cuban heroes unjustly imprisoned in the United States, arrived in the UK this morning together with their families to participate in the “Miami Five Freedom Tour”

The Cuban anti-terrorists and heroes of the Republic of Cuba, René González and Gerardo Hernández, arrived in the UK this morning, Friday July 8, together with their families, to participate in the “Miami Five Freedom Tour” during which they will speak about their unjust imprisonment in the United States and express their gratitude for the solidarity of British activists in the struggle for their freedom.

The tour is organized by the Cuba Solidarity Campaign in the UK (CSC), with the support of several unions, following fundraising by members and affiliates.

Until just a few days ago, the visit was threatened by a delay in granting visas to René and Gerardo by the British Home Office.

On Monday, July 4, CSC called on its members, affiliates and supporters to contact their MPs to urge them to issue the visas, after the Home Office stated that the case was “complex” and failed to provide a date for the final visa decision.

In 2014, Cuban Hero René González was denied a visa to visit the UK for the second time, having been invited by a group of MPs to attend a meeting in Parliament to discuss the case of the Five.

After the British government denied him the visa, a group of 28 MPs — including current Labour leader Jeremy Corbyn — appealed the decision by writing to judges to state that the Home Office was violating the European Convention on Human Rights. Last year, in a unanimous decision, the Court of Appeal ruled that the refusals breached the freedom to receive and impart information under Article 10 of said Convention.

Following a huge response to the CSC’s appeal, this Wednesday, July 4, it was announced that visas for the two Cuban anti-terrorists had finally been issued, marking another victory of British solidarity with Cuba.

From July 9-17, Gerardo Hernández and René González will visit several cities across the UK, including London, Manchester (northern England), Glasgow (Scotland) and Cardiff (capital of Wales), where they will be greeted by hundreds of activists who fought for the Five’s freedom over 16 years.