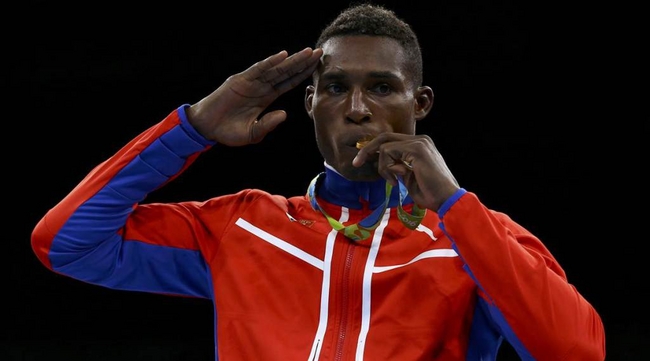 Julio César La Cruz on the podium with his gold medal in boxing, light heavyweight division, at Rio 2016

With the highest record of Olympic medals in Latin America, Cuba owes its sports achievements to the socialist revolution.

The devastating U.S. blockade on Cuba, which has lasted for more than 50 years and includes restrictions on the nation's sporting industry, has not stopped the island from becoming the most successful Latin American country in Olympics history and an example for the rest of the region and world.

Historically speaking, Cuba is by far and away Latin American leader in the Olympics: 209 medals in total, 79 gold, 67 silver and 70 bronze.

This unique historical achievement for a country of just over 11 million people is the result of policies following the Cuban revolution of 1959, when the government spent millions on funding sports schools in the hope of producing professional athletes able to wear the Cuban flag with pride.

Since the very first Olympic Games in Paris 1900 all the way up until Rome 1960—just before the U.S. imposed its blockade—Cuba had won 12 medals. In contrast, after the victory of the revolution and up until Rio 2016, the small island nation has won a staggering 197 medals.

In particular, Cubans have dominated boxing with 67 medals, athletics with 40 and even judo with 35.

The physical education system in Cuba, prior to Castro’s revolution, was unable to attract the participation of the nation's masses. Professional athletes were mostly made up of a privileged few and the privately educated bourgeous. Cuba had very few professionals and teams competing on the international level.

In 1928 Cuba inaugurated a Physical Education National Institute, which was forced to close just four years later. This was eventually reopened in 1948 but the body suffered from severe financial restraints and failed to achieve any of its aims. Equipment was underfunded, the quality of coaching and teaching was poor and students had to pay to be admitted to the schools.

After Castro entered Havana on Jan. 1, 1959, the revolutionary government approved and implemented a nationwide plan to improve the nation's sports practice, resulting in free and universal access to sports schools for every citizen.

In 1961, Cuba created the National Institute of Sports, Physical Education and Recreation which was placed in charge of promoting sports for children, adults and even the elderly on the island.

The state-run program was also charged with improving the quality of service in its sports facilities, manufacturing its own equipment and conducting research in sports science.

The success of Cuba's sports teams are not just measured in Panamerican and Olympic success. More than seven thousand Cuban trainers, teachers, technicians and researchers have closely worked with sports delegations in more than 50 countries on solidarity missions.

Sanctions and blockade by the U.S.

Following the the revolution of 1959, the U.S. government began a campaign of destabilization against Cuba, resulting in a commercial and economic blockade which was in full swing by 1962.

The blockade affected all aspects of Cuba's economic and cultural life, and the nation's sports industry was not spared. The U.S. blockade was responsible for millions of dollars in losses that may have been generated by the industry, but it also placed harsh restrictions on Cuban athletes.

As an example, Cuban baseball players are the only nationality in the world that must first renounce their citizenship should they want to compete professionally in the U.S. or Puerto Rico.

At the same time, U.S. athletes are banned from training in Cuba and are unable to participate in any international competition organized by the Cuban government.

The U.S. State Department, for example, denied visa requests to Cuban athletes in 2007 when they tried to enter the country. From 2002 until 2004, more than 60 Cuban athletic directors and teachers were denied entry to the U.S.

Cuba is also unable to import sports equipment and materials from the U.S., instead relying on Asian markets where import costs are even higher.