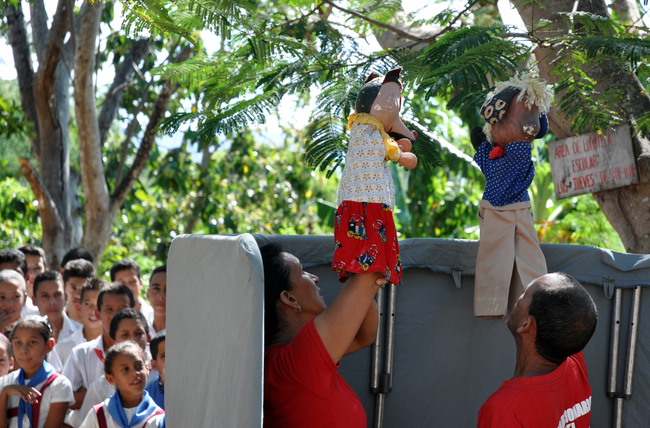 During Cuban Culture week, art companies and organizations including the experienced and award winning Guantanamo Guiñol and members of the Hermano Saiz Association will take their talents to the areas affected by Hurricane Matthew aimed at offering hope and support to the people.

The Provincial Culture Office promotes this solidarity art brigade called Juan Marinello appreciated by the people of Baracoa, Maisi, San Antonio del Sur and Imias and which will also include the traditional musical groups Celso and its Changui.

Another that will lighten up the lives of the people is the Rios Theater that has a lot of experience of community work and is very much loved in that areas for its work early each year of the Guantanamo-Baracoa Theater Crusade.

They along with writers, trovador artists among others in the province they will share their experiences with those affected by the hurricane and will also join in the recovery efforts in the territories hardest hit by Matthew.

Eldys Baratute, Provincial President of the Hermanos Saiz Association, pointed out that they are proud of participating in the Cuban Culture week.

"We will be happy to take our spirituality to the affected population and support the reconstruction of their communities, he said, with the same solidarity conviction that made Carlos Manuel de Cespedes rang the bell at his Demajagua Farm freeing his slaves and fighting for the independence of Cuba from Spanish colonialism."

The Martha Machado Art Brigade directed by Cuban artist Alexis Leyva (Kcho) also arrived to Baracoa this past weekend to join the activities while the Montana Artistic Comprehensive Group will soon arrive to the town of Imias and Cajobabo.

Heading the last group is the Work Youth Army headed by Major Ruben Nicolas Macias, assures they will arrive with different manifestations to other affected areas of the municipalities with the main mission of cheering the souls of each one affected by the hurricane and work in collecting rubble and repairing homes.