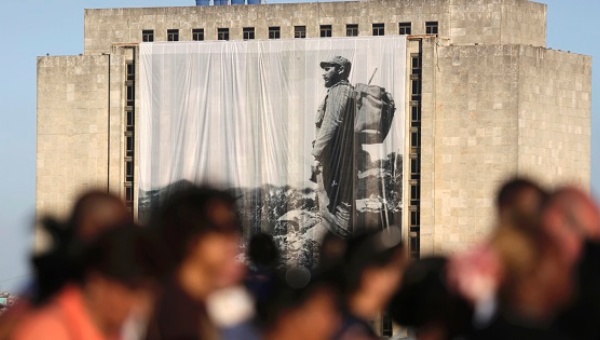 Cubans began to pay final respects Monday to the late president and revolutionary, known simply as El Comandante on the island.

Tens of thousands of Cubans flocked to Havana’s Revolution Square Monday to pay final respects to revolutionary leader and former President Fidel Castro, who passed away Nov. 25 at the age of 90.

A long line of supporters snaked through the vast square as Cubans walked by a memorial to the former leader. Some mourners were in tears, others saluted a flower-flanked nearly life-sized photo featuring Fidel dressed in his iconic army fatigues.

Elsewhere in the square, a massive banner of the revolutionary icon was draped across the facade of the Cuban National Library — the same place graced by an image of Jesus during Pope Francis’ historic visit to the island last year.

"Who is not going to be affected by a man who did everything for us?" Jose Luis Herrera, one of the workers who help hand the larger-than-life photo, told Reuters. "He is the one who guided me and my children. He is my god."

The massive public event began at 9 a.m. local time is the first part of a two-day memorial dedicated to the former president as the country observes nine days of mourning. Cubans are expected to continue to flow by the thousands into the square where Fidel often addressed large crowds. The formal memorial services will wrap up Tuesday night, when foreign leader are expected to pay their respects to the man that dedicated his life to fighting imperialism and died of old age after surviving 638 CIA assassination plots.

A mass gathering in the square Tuesday night will close the memorial before Fidel’s ashes depart on a cross-country tour retracing in reverse order his historic steps from Santiago to Havana in 1959 to mark the triumph of the revolution that toppled the military dictatorship of Fulgencio Batista. The five-day procession will conclude with a state funeral in Santiago, where Fidel’s ashes will be put to rest at the Santa Ifigenia cemetery, famous for housing the remains of Cuban independence hero Jose Marti and other revolutionary figures.

Fidel was cremated Saturday after his younger brother and successor President Raul Castro announced he had passed away at 10:29 p.m. local time. The government declared nine days of national mourning, which has seen events and alcohol sales suspended and flags lowered to half mast. World leaders have rushed to extend condolences to the Cuban people, which have ranged from enthusiastic praise of his revolutionary and internationalist legacy from Latin American and African leaders to incendiary comments from U.S. President-elect Donald Trump.

Fidel’s last major speech in Havana’s Revolution Square was on International Workers’ Day in 2006, in which he spoke about the achievements of the revolution since its 1959 victory and the scourge of U.S. imperialism. Months later, the then-president fell into ill health underwent surgery, forcing him to go on medical leave and delegating his duties to then-Vice President Raul Castro until he officially exited politics in 2008.

Fidel Castro governed Cuba for half a century after leading the revolutionary army that overthrew the brutal Batista dictatorship in 1959.