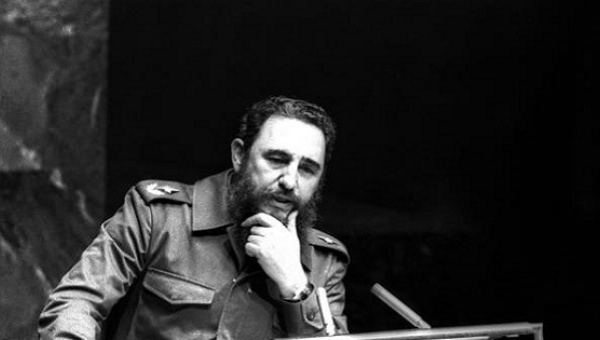 Fidel Castro was remembered fondly by UN President Peter Thompson before the assembly went on condemn Israel's belligerence towards Palestine.

Adding to the tsunami of praise and respect pouring in for Fidel Castro from around the world, the United Nations General Assembly held a minute of silence in honor of the revolutionary leader on Tuesday.

All 193 members stood up and bowed their heads to express their respect for the Cuban leader, who died at the age of 90, at the request of General Assembly President Peter Thompson.

Leading up to the gesture of respect, Thompson expressed his admiration for a “tireless advocate of equity in the international arena” and extended his condolences to Fidel’s family and the Cuban people.

“I'm deeply saddened by the passing of Fidel Castro,” he said. “Fidel was one of the iconic leaders of the 20th century, with a great love of his homeland and the Cuban people. He...was an inspirational figure for developing countries in particular.”

The tribute happened to fall on the same day as the UN celebrated the annual “International Day of Solidarity with the Palestinian People.” Many delegates, including Thompson, sported Palestinian flags as a sign of solidarity.

At the end of the tribute to the Cuban leader, the session went on to focus on the “question of Palestine,” preparing for votes later in the week on six resolutions condemning Israel’s belligerent stance, CNS News reported.