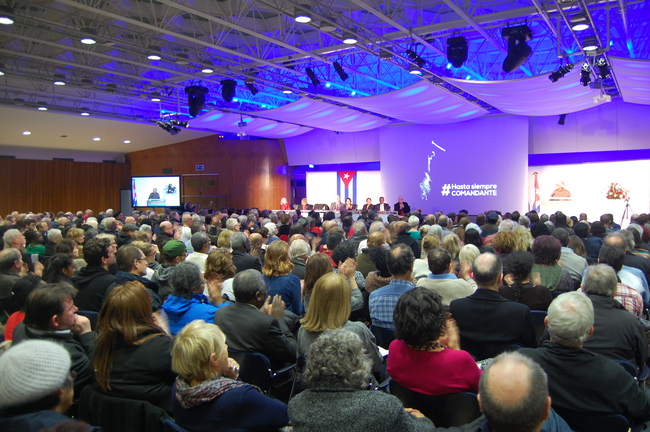 Due to overwhelming public demand and high registration numbers, CSC changed the venue just days before the event to the Congress Centre to accommodate the huge numbers of guests - and still there was standing room only, demonstrating excellent international solidarity with Cuba in Britain.

The tone of the evening was one of remembrance – and celebration - of the contribution that Fidel Castro had made in Cuba and internationally, with Cuba’s internationalism in Latin America, the Caribbean, Africa and Asia recognised throughout the evening.

The Cuban national anthem was played the begin the evening and a minute's silence was given in memory of Fidel.

“Those who die fighting for life cannot be called dead. Fidel will continue to live; in the faces of the children who go to school, in the sick whose lives are saved, in the workers who own the fruits of their labours."

“In the most unequal continent in the world, you have left us the only country; with zero child malnutrition. With a higher life expectancy, With 100 percent school enrolment. Without a single child living on the street.”

“Our America faces new challenges – perhaps bigger challenges than you faced during 70 years of struggle. Today the people of our America are more united than ever. Never lying nor betraying your moral principles, of this deep conviction.

“There is no force in the world capable of crushing the power of truth and ideas with you Comandante Fidel Castro Ruz. With Camilo Cienfuegos, with Che. With Hugo Chavez Frias. We learned to believe in a new Latin American man. One capable of fighting through organisation and awareness. The ongoing battle of liberating ideas. That we will build a just and peaceful world. It is for those ideas that we keep fighting. We promise!”

Teresita Vicente, Cuban Ambassador, gave a moving tribute. “Today we know that over 200 million children sleep on the streets in the world. Not one of them is Cuban. Millions of people all over the world lack healthcare, lack education and lack social security. None of them are Cuban.”

All of this had been achieved, she said, despite the fact that “Cuba has been under permanent attack and blockade for almost 60 years.”

“We will struggle until the end of the immoral, illegal and criminal US blockade against our country. We will fight for the return of the illegally occupied territory at Guantanamo.”

Writer and historian Tariq Ali said, “What do we learn from Cuba? We learn patience. We learn don't give up. How many times has the West written off the Cuban Revolution?

"In our hearts you will live forever and the Cuban Revolution will last for a long time. We will never forget you. Hasta la victoria siempre!", he said.

Culture has been at the heart of the Cuban revolution and musical contributions and poetry readings added to the atmosphere of the evening.

Rocío Maneiro, Venezuelan Ambassador, spoke on behalf of the ALBA countries in memory of Fidel. "Fidel is the son of Bolívar, the son of Jose Marti. He fought for social justice and independence for our lands.

"The dream of friendship, solidarity and integration is being made reality by Latin American countries who believe a better world is possible," she said.

Author Richard Gott paid tribute to Fidel's internationalism in Africa and his support for black civil rights movements in the US and his meetings with Malcom X and Angela Davis.

Lt Col Rui Goncalves, Angolan Embassy said, “If it was not for Cuba, Angola would have fallen under the South African apartheid army – and I can honestly said that I wouldn't be standing here today.”

Cuba’s support for Angola went beyond the military support, he said. “All my teachers when I was growing up were Cuban. Many doctors in Angola were Cuban. Fidel and Cuba helped our country in so many ways that we will forever be grateful for”.

Richard Burgon MP gave a barnstorming speech which ended in a huge standing ovation. “I agree with Nelson Mandela's assessment of Fidel Castro, which is why I'm proud to be here tonight where we can reflect on Fidel’s Castro’s life, his contribution and living legacy.

“When I hear Fidel Castro, I’ll always think of the doctors and nurses sent by Cuba to the poorest parts of our globe”, the Shadow Justice Secretary said.

Bernard Regan, CSC National Secretary, was the final speaker of the evening. He said “The ignorance and prejudice of some of UK press against Fidel Castro and the Cuban Revolution has been scandalous.”

“In Cuba they have real, participatory democracy, with the involvement of the trade unions, Federation of Cuban Women, the students, and other mass organisations.”

“There is a world of work to be done. We need to challenge at every step of the way all the misinformation about Cuba in the British press. We need to redouble our efforts to stand in solidarity with Cuba and defend Cuban sovereignty.

Photos from the event are on the CSC Flickr page here