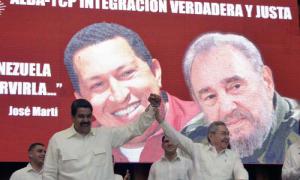 This Monday, April 10, an Act of Solidarity was held with Venezuela, following the 15th Political Council of the Bolivarian Alliance for the Peoples of Our America – People’s Trade Treaty (ALBA-TCP).

Various declarations were adopted in solidarity with Nicaragua, Venezuela and Caribbean countries.

The Political Council also celebrated the electoral victory of Ecuador’s Alianza País presidential candidate, Lenín Moreno, who will provide continuity to the Citizens’ Revolution in this country.

“Our region is facing the effects of a strong and articulated imperialist offensive against progressive governments,” warned Ulises Guilarte de Nacimiento, secretary general of the Cuban Workers’ Federation (CTC).

The President of the Federation of University Students (FEU), Jennifer Bello, reiterated that Cuba will never return to the OAS.

Venezuelan President Nicolás Maduro expressed his gratitude for the solidarity demonstrated by different sectors of Cuban society, especially young people, who filled the Havana International Conference Center with cries of “Maduro, friend, Cuba is with you!”

The Bolivarian leader stressed that the OAS did not and will not defeat Venezuela and its revolution.