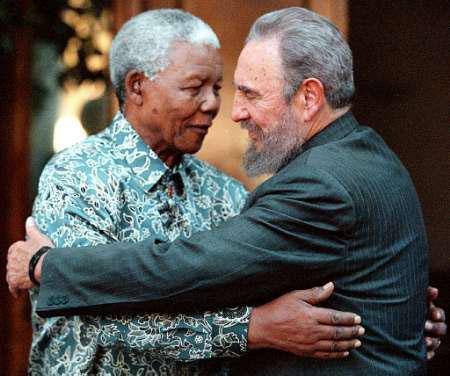 Mandela found inspiration in Fidel and the Cuban Revolution of 1959, after which he led the South African resistance militia to end racial oppression.

Cuba's Havana announced Wednesday a mini-marathon for the upcoming International Mandela Day slated for July 18-that marks the birth of the legendary South African leader who led the Apartheid movement to put an end the institutional racism.

The 4th edition of the event that will be attended by over 300 runners from across the nation was officially announced by Patrick Rankhumice, charge d'affaires of the South African Embassy in Havana and Carlos Gattorno, Marabana President, Prensa Latina reported.

"For us it is vital to celebrate once again this four-kilometer mini-marathon in Havana and to honour along with the Cuban people the legacy of a man who did so much for the freedom of my country and for social justice," Rankhumice said in a statement.

The diplomat recounted the strong ties between the nations of Cuba and South Africa and the friendship between the two legendary men, Mandela and Fidel Castro, the revolutionary leader of the Cuban Revolution.

'This is a race that from its first version has deeply touched the Cuban people concerning the participation, but above all, because it implies Mandela's image, values and historical legacy, ' Gattorno said, according to Prensa Latina.

The camaraderie between Fidel Castro and Nelson Mandela is well known. Mandela found inspiration in Fidel and the Cuban Revolution of 1959, after which he led the South African resistance militia to end racial oppression.

In his autobiography, “Long Walk to Freedom," Mandela wrote, “I read the report of Blas Roca, the general secretary of the Communist Party of Cuba, about their years as an illegal organisation during the Batista regime. In Commando, by Deneys Reitz, I read of the unconventional guerrilla tactics of the Boer generals during the Anglo-Boer War. I read works by and about Che Guevara, Mao Tse-tung, Fidel Castro.”

After Mandela was released from the prison in 1990, he travelled to Cuba to meet his Fidel in person to thank him for sending soldiers to fight apartheid regimes in Angola during the 1970s and 1980s, known to have spurred the events leading to the end of apartheid.