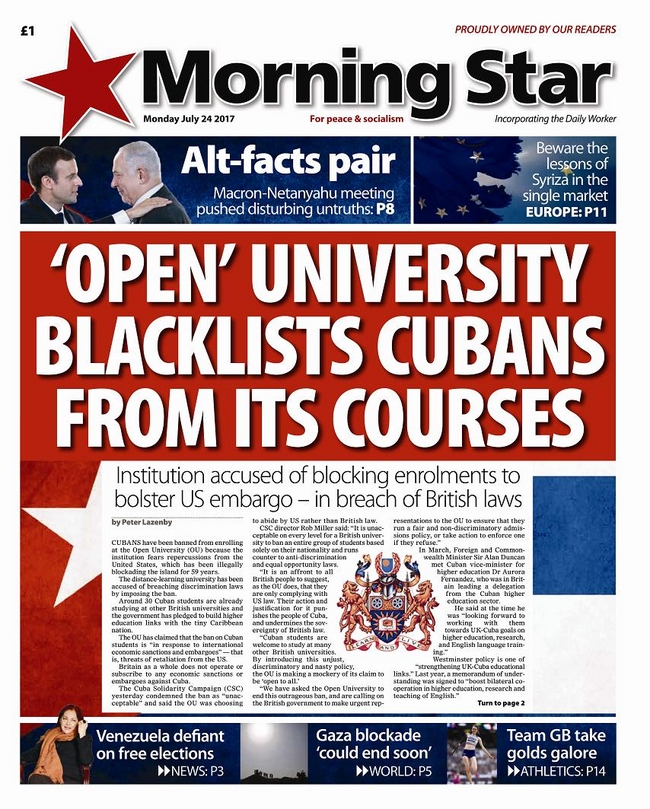 CUBANS have been banned from enrolling at the Open University (OU) because the institution fears repercussions from the United States, which has been illegally blockading the island for 55 years.

The distance-learning university has been accused of breaching discrimination laws by imposing the ban.

Around 30 Cuban students are already studying at other British universities and the government has pledged to build higher education links with the tiny Caribbean nation.

The OU has claimed that the ban on Cuban students is “in response to international economic sanctions and embargoes” — that is, threats of retaliation from the US.

Britain as a whole does not operate or subscribe to any economic sanctions or embargoes against Cuba.

The Cuba Solidarity Campaign (CSC) yesterday condemned the ban as “unacceptable” and said the OU was choosing to abide by US rather than British law.

CSC director Rob Miller said: “It is unacceptable on every level for a British university to ban an entire group of students based solely on their nationality and runs counter to anti-discrimination and equal opportunity laws.

“It is an affront to all British people to suggest, as the OU does, that they are only complying with US law. Their action and justification for it punishes the people of Cuba, and undermines the sovereignty of British law.

“Cuban students are welcome to study at many other British universities. By introducing this unjust, discriminatory and nasty policy, the OU is making a mockery of its claim to be ‘open to all.’

“We have asked the Open University to end this outrageous ban, and are calling on the British government to make urgent representations to the OU to ensure that they run a fair and non-discriminatory admissions policy, or take action to enforce one if they refuse.”

He said at the time he was “looking forward to working with them towards UK-Cuba goals on higher education, research, and English language training.”

Westminster policy is one of “strengthening UK-Cuba educational links.”

Last year, a memorandum of understanding was signed to “boost bilateral cooperation in higher education, research and teaching of English.”

CSC has launched a campaign to persuade the OU to lift its ban on Cuban students and is urging supporters to write to their MPs over the matter.

The US economic blockade was imposed by president John F Kennedy in 1962, extending restrictions from 1960, and maintained by every subsequent president.

Relations between Cuba and the US improved under President Obama, though the economic blockade remained largely in place, but President Trump is tightening restrictions against island country of 11 million.

The blockade, which has been declared illegal by the United Nations every year since 1992, has significant and punitive effects on Cuba, including its health and education services.

Drugs and medicines have to be shipped from China and other countries, despite being available just 90 miles away in the US.

For more information and to take action in the campaign to end the OU's policy of banning Cuban students, please visit http://cuba-solidarity.org.uk/ou/