Cuba has graduated 170 doctors from the United States 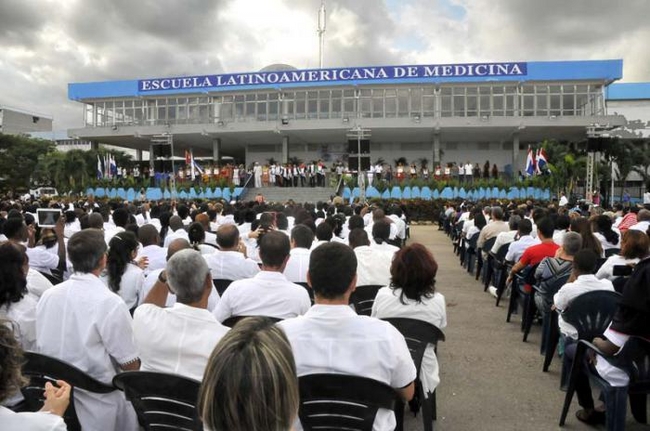 HAVANA, Cuba, Aug 2 (ACN) Cuba has graduated 170 doctors from the United States through the project of the Latin American School of Medicine (ELAM), which was initiated by Cuban leader Fidel Castro in November 1999.

In exclusive to Cuban News Agency, Zenia Díaz Catalá, director of the general secretariat of the ELAM project, said that since the first graduation in 2005, to date, ELAM have graduated more than 28,500 doctors from 103 countries, free of charge.

Dr. David Floyd, from the 2016-2017 promotion, thanked the Cuban leadership, the Cuban people, the teachers and workers of this noble project, an example of integration between peoples for a more humane world.

For me it has been a wonderful experience, I am impressed on the link between study and work, unlike training in the United States and other nations, stressed the young physician.

In Cuba we are trained by touching the patient, that was the greatest thing, the solidarity; in my country no one helps the other student, here teachers support the preparation with excellent behavior, said Floyd, an African-American, who studied in Cuba for seven years, including the pre-doctor studies.

The doctor finished his curricula at the Salvador Allende Faculty of the University of Medical Sciences of Havana, an institution that graduated 52 foreign doctors, 25 of them from the United States, Dr. Suiberto Echavarría, dean of that institution, said.

David Floyd, the father of the recent graduate, conveyed his eternal gratitude and said he was very impressed, pleased and honored because his son is a doctor trained in Cuba under ethical and moral principles, with a humanist conception.

Diaz Catalá explained that currently the ELAM project has a enrollment of 4,969 students from 112 nations in the 21 faculties of the country's medical science universities, of which 83 are from the United States.