ELAM: A beacon of fraternity, solidarity and collectivity 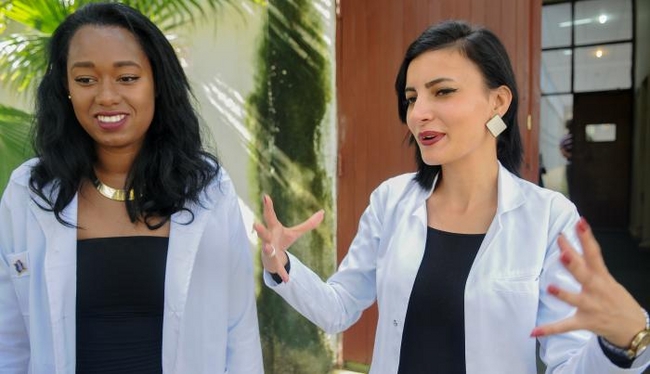 To offer health and hope around the world is among the missions of the more than 28,500 doctors from 103 countries who have graduated from the Latin American School of Medicine (ELAM), which this year held its 13th graduation.

This beautiful project of fraternity, solidarity, and justice was founded in 1998 on the initiative of Comandante en Jefe Fidel Castro Ruz. According to the most recent graduates, interviewed by Granma International, they have been imbued with a spirit of collectivity, humanism, and scientific rigor.

Narciso Paucca Cancho, from Ayacucho, Peru, emphasized the efforts of the school’s teachers, who gave their time to help students overcome any difficulties. “In the moments on duty and in consultation, they teach us to draw on emotional strengths to provide encouragement to patients and to know how to respond with hope to those who are in the terminal phase of an illness.”

Narciso’s classmate, José Carlos Ottivo Pérez, from Lima, noted: “I have learned much more than in a normal university degree program. In my country, doctors are focused on professional competitiveness and do not teach their knowledge. Here, the medical professors expand on their experiences, provide updated information and instruct you on how to find more.”

Both highlighted the open communication between students and teachers, and the openness to ask any question to clarify doubts arising in the educational process. Once they are rotating in hospitals, from the third year on, an ethical notion is instilled as a habit, to dialogue with patients and their families, particularly during the initial consultation, in order to draw up clear clinical records.

Narciso hopes to specialise in surgery, while José Carlos prefers internal medicine or pediatrics, but they must first return to their countries of origin and undertake another year of study in their chosen specialties, pass a rigorous examination, and revalidate their degree titles, in order to be able to exercise their profession.

José Carlos explained that his biggest fear lies in confronting the medical system of a capitalist country, in which the patient is considered a client, and their care depends on the money they can invest in diagnostic tests and medicines.

In many cases, previous agreements between doctors and pharmacists are made, to generate mutual financial income, to the detriment of patient care. “Here we were taught complete devotion and dedication to solve peoples’ problems, with seriousness and a very strong profession discipline,” the young Peruvian stressed.

Dalena Catabí Lozano, from Guatemala, expressed a similar opinion. She must also undertake another year of internship upon returning to her country, without receiving any salary, and covering personal expenses for food, transportation and accommodation, in addition to paying tuition fees.

She is from the Los Pastores community, in Sacatepéquez department, where there is only one hospital with a shortage of doctors, located several kilometers from her home. Therein lies one of the reasons why she chose the profession.

As she explained regarding the decision to study medicine in Cuba: “My village was hit by a hurricane in the late 1990s resulting in a huge humanitarian disaster, due to floods and landslides. We saw a brigade of Cuban doctors arrive. Those professionals provided assistance to the victims buried in the mud. We all witnessed that attitude of digging up houses to rescue people alive. They travelled far and wide to search communities with a backpack full of medicines.”

Dalena contrasted this altruistic work with that of doctors trained in her country, and noted that Guatemalan families view the medical career as a form of ensuring economic prosperity. She explained that many acquire bank loans in order to pay for their studies, as being a doctor means belonging to a social class with real economic power. They never consider actually solving the population’s health problems.

“When I arrived in Cuba,” she continued, “I was accommodated at ELAM, and I met very caring people. I’m referring to the workers who do the cleaning or work in the kitchen/canteen. They embraced me without knowing who I was and where I came from. They gave me psychological and moral support. They treated us like their own children. That is a very fraternal experience. I have seen that this is the way most Cubans are.”

Claudia A. Tavares Olivera, from Cape Verde, offered a similar experience. She recalled her Spanish language classes, before beginning her university studies, and her teacher, Arianna: “She was very close to us; she knew our characteristics and was always willing to solve any difficulty. With her I learned much more than Spanish. She made us understand the culture and way of life of Cubans. I saw in her a teacher, a mother, a friend,” the young graduate of the Artemisa school of medical sciences expressed.

Claudia learned of the possibility of studying in Cuba through an uncle who also graduated from ELAM and currently works as an urologist. She was selected to receive a scholarship from among a large group of candidates with the best high school results.

She noted that her greatest difficulties were in the subject of morphophysiology, which combines anatomy, biochemistry, epidemiology and other fields. She highlighted the rigor of end of year examinations, which require extensive reading over a short period of time.

Her classmate, Rasha Khalil from Jordan, echoed such statements, noting her great difficulty in passing the subject in the first year, increased due to her limited Spanish.

“When I arrived in Cuba, I didn’t know a word of Spanish,” she explained. “I received an intensive Spanish course for six months; the other six months were dedicated to pre-university courses that help you understand university studies. My Spanish language improved when I finished the first two years at ELAM and continued my degree in Cuban hospitals, attending to the population.”

Although she also had difficulty adapting to the food and understanding the idiosyncrasies of Cubans, she now knows how to dance Casino (Cuban-style salsa), and has made friends who are like family.

“I’m excited to talk about Cuba. I arrived at the age of 17 and have lived here almost 8 years. My personality was formed on this island. Here I leave behind many loved ones, mainly in Artemisa. I can mention the family of photographer Pedro Reyes, of Mercedes Chávez, and grandma Lazarita. They all gave me great emotional support and I received a lot of affection in their homes,” she said.

All these students thank Cuba for having trained them with a humanist and internationalist spirit, making them aware of their role in society. As they return to their home countries, they are committed to becoming the agents of change that humanity so badly needs.

For more information on ELAM, watch the documentary 'Community Doctors' on the CSC YouTube channel here