Ramón Labañino: The changes in Cuba aim at improving our Socialism, not dismantling it 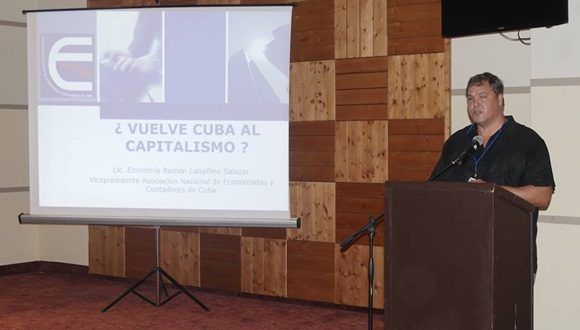 As part of the academic program of the I International Scientific Convention of the “Marta Abreu” Central University of Las Villas (UCLV), Ramón Labañino, Hero of the Republic of Cuba, gave a keynote address today and spoke with those present about the main challenges of updating the Cuban economic model.

With a title as controversial as “Is Cuba returning to Capitalism?” , the Vice-President of the Cuban National Association of Economists and Accountants, presented in his talk the main characteristics of the national context. He discussed the need to understand the changes made in the Island as a way of working to ensure a better standard of living and an equitable and fair benefit for all citizens of the nation.

“The name of my talk is just a hook, a provocation to discussion, but what really matters is to draw attention to the most negative characteristics of capitalism and what are the inviolable essences in our country in order to maintain the social model chosen by the island for more than 50 years,” he added.

In his presentation, Labañino outlined the main characteristics seen in the Union of Soviet Socialist Republics years before the fall of Socialism in that country. The role of the party, the need to keep the media in the hands of the people, to avoid regionalism, as well as the “wholesale privatization and commodification of the socialist economy” are factors that are essential for us not to repeat in Cuba the mistakes made in the Eurasian nation, he said.

He also referred to the importance of preserving the policy of a single party against alternatives aimed at dismantling that idea and advocated confronting imperialism’s cultural war with intelligence and a critical sense.

“The single party strengthens us as a nation. Defending alternative formulas to ours, based on a model of democracy that has already proven its ineffectiveness in many countries, means playing Imperialism’s game. Our party has the essences of that created by Marti in 1892: anti-imperialist, sovereign and with a defense of national dignity as the first inviolable law. These characteristics make it strong and necessary in every moment of the country’s history. “

Issues such as monetary dualism, the role of the press in the country, non-agricultural cooperatives, work in the agricultural sector, the development of the labor force in the public and private sectors and the need to increase labor productivity in all the areas of the country as a basic rule to achieve an effective growth of the Cuban economy, were also among the main issues discussed between the Hero and the delegates gathered to hear it.

Regarding the new economic figures that emerged in the heat of the changes implemented in the Cuban economy, Ramón spoke about their importance to free the state from the unnecessary wear and tear of controlling small spheres, but warned of the importance of carrying them out so that their income also plays a key role in the development of society.“What we transfer to private hands is not property, but the management of social property,” he summarized.

Similarly, Labañino discussed the relevance of the main transformations to the economic, political and social model of the country. He defended the idea of ​​that these changes are essential for subsistence as a nation, but always for the sake of maintaining our social achievements .

“In a highly democratic process, the greatest news was consulted with the majority of Cubans, because one of our great strengths is that the measures applied are based on all citizens, especially to defend the most underprivileged. Although we want a greater speed in implementation, sometimes we must stop, rectify what is wrong and move forward, because we can not afford to make mistakes and waste the few resources at our disposal,” he said.

After his comments, the Hero of the Republic of Cuba talked exclusively with Cubadebate. He said the the merit of sharing his experiences in an event like the one organized by the UCLV, a Department of Advanced Studies “with highly-qualified professionals in both the technological and the political, as well as the scientific and academic.”

Likewise, Labañino spoke of his experience of returning to the island after 15 years of absence. He said he found a country “always changing, with a beautiful and well-done opening, especially since there is an awareness that the transformations in our society exist because of an historical necessity and not because of a whim or an idea of ​​playing at Capitalism,” he said.

Questioned on the main challenges for Cuba’s present and future, Labañino did not hesitate to describe the blockade imposed by the United States as the first of them. “Although people sometimes do not see it, every economic action bears its stamp. If this were not so, our country would do better, because we have a high cultural and educational level, natural conditions and a high professional capacity to rub shoulders with first world nations. “

In a simple dialogue, always open to discussion and sharing experiences, the anti-terrorist fighter recalled the importance of knowing history so as not to repeat negative experiences. Likewise, in these times of “empty and manipulative discourses,” he highlighted Fidel Castro’s legacy for the construction of an increasingly prosperous and inclusive country. He warned of the importance of maintaining essential principles of the Cuban Revolution, such as internationalism, anti-imperialism and solidarity with the peoples of the Third World.