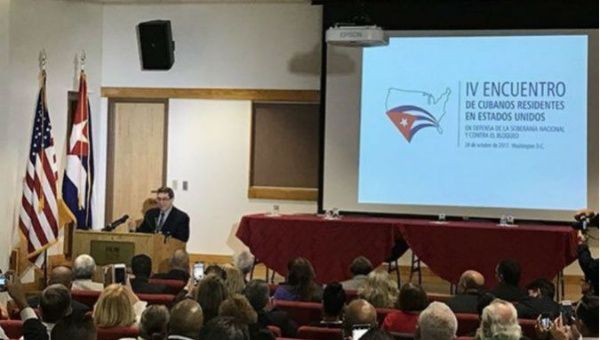 Cuban Foreign Minister Bruno Rodriguez speaks at the 4th Meeting of Cuban Residents in the U.S. in Defense of National Sovereignty and Against the Blockade. | Photo: @CubaMINREX

“While the U.S. government shuts down, Cuba opens up,” the island's foreign minister said.

Cuban Foreign Minister Bruno Rodriguez said that migration has been used as a form of aggression by the United States against Cuba, including the malicious assertion that Cubans continue to emigrate in mass.

Speaking at the Fourth Meeting of Cuban Residents in the United States in Defense of National Sovereignty and Against the Blockade, in Washington D.C., he noted that despite complications in bilateral ties, there are no deep contradictions between Cubans living on the island or elsewhere, nor are Cubans fleeing the country in huge numbers.

“While the U.S. government shuts down, Cuba opens up,” said Rodriguez in reference to the U.S. administration's unilateral decision to reduce embassy personnel in Havana and Washington, a move that adversely affects visa applications for Cubans wanting to travel to the United States.

Rodriguez stressed that while there's been a noted increase in the number of Cubans traveling abroad – over 769,000 since January 2013 – the socialist country has welcomed an ever-increasing number of compatriots living outside of the country, especially from the United States, according to Prensa Latina.

However, that trend, Rodriguez emphasized, had to overcome six decades of political animosity exercised by successive U.S. administrations.

He attributed the success to the repeal of the “dry-foot/wet foot” policy which encouraged illegal and disorderly migration to the United States, claiming the lives of countless Cuban nationals in the process, and also cited the abolition of the “parole” policy for Cuban medical professionals.

However, another point of contention continues to be the Cuban-Adjustment Act which, according to Rodriguez, remains a sticking point in the normalization of full diplomatic relations between the two countries and continues to encourage irregular migration from Cuba to the United States. The law also affects Cubans who want to obtain a tourist visa to visit the United States.

During his speech, Rodriguez also announced new migratory regulations that will go into effect in January 2018. One of those measures, according to Cubadebate, includes the admission of Cuban citizens who left the country illegally. The only exception to the new law pertains to those who left the island via the U.S. Naval Base in Guantanamo Bay.

Other measures to be adopted include the elimination of Cuban residency requirements for those children of Cuban residents who live abroad; the authorization of Cuban citizens residing abroad to enter and leave the Caribbean island on recreational boats via the Hemingway International Tourist Marina and Gaviota-Varadero Marina; and the elimination of the need for Cuban citizens living abroad to obtain the “habilitacion” or multi-entry visa stamped on their passports.