Minrex statement on the provisions and regulations issued by the Departments of State, the Treasury and Commerce 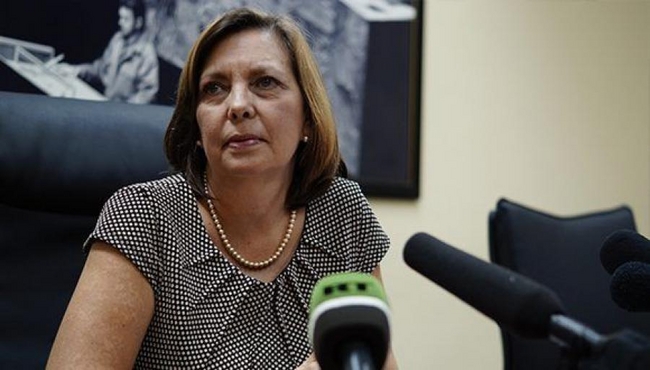 Today, November 8, the Departments of State, the Treasury and Commerce issued new provisions and regulations to implement the measures aimed at strengthening the blockade on Cuba announced on the past June 6, by President Trump and included in the executive order entitled “National Security Presidential Memorandum on Strengthening the Policy of the United States Toward Cuba”, which established the policy of his government towards our country.

These provisions and regulations that will enter into force as from tomorrow November 9, are contained in three documents:

1) List of the US Department of State on “Restricted Cuban Entities”.

• This is a list of 179 Cuban entities, with which direct financial transactions are henceforth prohibited to US entities and citizens, and on which a policy of denials for license applications to export and reexport US goods and services will be applied.

• It is an arbitrary list, composed of different Cuban entities that are allegedly linked, on no grounds whatsoever, to the defense and national security sector. This list includes the Ministry of the Armed Forces, the Ministry of the Interior, the National Revolutionary Police, the Border Guard Troops, enterprises, public corporations, the Mariel Economic Development Zone, the Container Terminals of Mariel and Havana, dozens of hotels throughout Cuba, travel agencies and stores. It even goes as far as to include soft drinks trademarks (such as Tropicola and Cachito) and rum trademarks, and even a photography service like PhotoService.

2) Regulations of the Office of Foreign Assets Control (OFAC) of the US Department of the Treasury, on the financial transactions and the travels to Cuba, which:

• Prohibit direct financial transactions with the Cuban entities listed by the US Department of State.

• Prohibit individual travels by US citizens under the category of people-to-people exchanges. From now on, they will have to travel under the auspices of a US organization or accompanied by a representative of that sponsoring organisation.

• Impose conditions to the educational travels that from now on will have to be sponsored by an authorised US organisation and conducted with the company of a representative of that sponsoring organisation.

• Establish specific requisites for those travelling under the category of “Support for the Cuban People Travel”, who will have to engage in a full-time schedule of activities, that enhance, following the US patterns, contact with the Cuban people, support what they define as civil society and promote their independence from the Cuban State. The political intention of this measure is clearly stated.

• Expand the list of officials of the Government and the State, the representatives of judicial organs, mass organisation and the press with whom transactions are prohibited.

3) Regulations by the Bureau of Industry and Security (BIS) of the Department of Commerce, on the policy of licenses for the export and reexport of items to Cuba.

• Establish that applications for licenses will be denied for the export and reexport of items to the entities included on the list of the US Department of State.

• Expand the categories of products that can be exported to the non-state sector, provided that they are not used to generate State revenues or contribute to the running of the Cuban State.

The measures confirm the serious regress of bilateral relations as a result of the decisions adopted by the government of the President Donald Trump.

They imply a strengthening of the blockade and of the prohibition on US citizens to travel to Cuba.

Some of the measures do not conceal their subversive undertone, like the one urging travellers to engage in activities of this sort to justify the legality of their visits to Cuba.

These measures will damage the Cuban economy and Cuba’s state and non-state sectors.

They will also damage the US citizens, whose right to travel to Cuba, the only country in the world they cannot visit freely, will be further restricted.

And they will affect the US business community that will be deprived of interesting business opportunities available in Cuba today, which they will lose to their competitors.