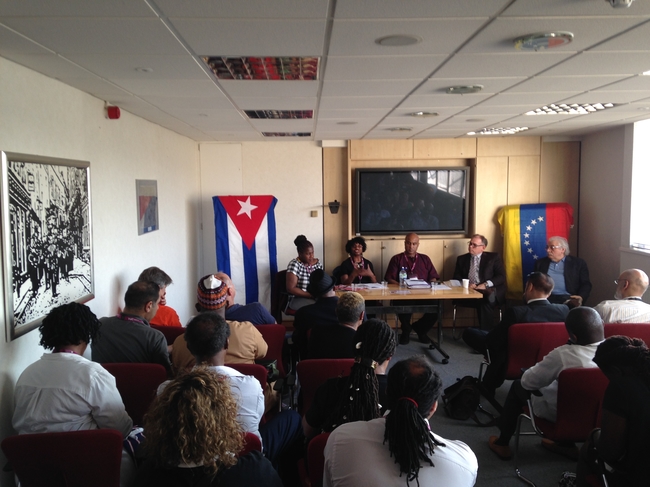 Julio Pujol, Cuban Embassy Political Counsellor informed delegates, "Despite the move backwards with US-Cuba from President Trump, we still want to normalise relations with the United States. But will not make any concessions on our sovereignty".

“The US must end the US blockade. There is not one Cuban family or social service that has not suffered from the blockade", he added.

Teachers Jenny Christopher and Lesley Koranteng spoke about their experiences in Cuba on a recent NEU (NUT Section) education-focused delegation to the island.

“As a black person in Cuba, I felt instantly at home. I saw people that look like me at all levels in Cuba, in the leadership positions in schools, in government, in the trade unions,” Jenny Christopher explained.

“When I asked about racism in Cuba, the response was always the same: ‘Everybody is Cuban’, they replied”.

“Cubans don't claim to have the model society - but they have made massive strides in the right direction”, she added.

Lesley Koranteng spoke about being inspired by the arts and culture that are valued so highly in Cuba. “Music is not frowned upon. It’s not seen as ‘the easy way out’. Music is respected, appreciated, natural, ad the foundation of an all-encompassing Cuban society”.

He urged solidarity with the island by trade union branches to affiliating to CSC, and praised Cuba’s internationalism. “Cuban doctors are the first workers on the ground all over the world, wherever they are needed”, McKenzie said.

CSC would like to thanks Thompsons Solicitors for sponsoring the fringe meeting.