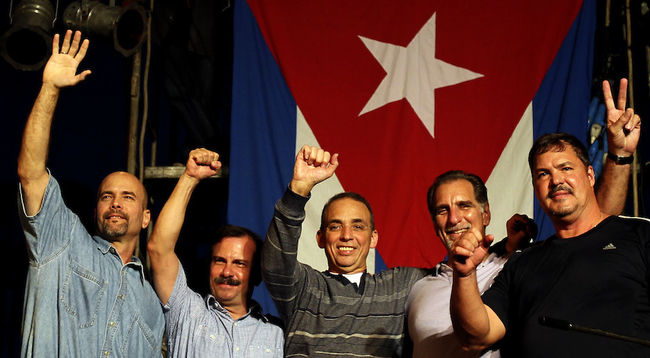 Miami Five hero will be visiting Britain this month

After a long delay and a brilliant response by Members of Parliament, Fernando Gonzalez Llort has finally received his visa for entry clearance to Britain. He is now arriving on 13th June to speak to MPs, the Cuba Solidarity Campaign AGM, the RMT Garden Party, UNISON National Delegate Conference and trade unionists across the country.

Fernando made his visa application on 16th April 2018 but a month later he was told that his application needed ‘additional processing’. Three years ago, Gerardo Hernandez and Rene Gonzalez, two other members of the Miami Five, had their visas refused on three occasions before a lengthy legal challenge and far reaching campaign finally secured their entry.

Solicitors then issued a pre action protocol letter for judicial review to the Home Secretary Sajid Javid MP making it clear that further delay would be deemed as ‘a clear violation of the Article 10 Rights of MPs to receive and impart information‘ which was the basis of the legal victory in November 2015.

Paul Heron, solicitor said “We are delighted that we could support Fernando in securing a visa to visit colleagues and MPs in the coming weeks. It is just a shame that the UKVI had thrown this historic visit into jeopardy by looking to refuse access to the UK”.

Once again we have been forced to take action to secure a visa for a Cuban visitor to the UK. We would urge the Government to do all it can to facilitate exchange, trade and understanding between UK and Cuba at a time when the Trump administration seems intent on reverting back to a ‘Cold war’ failed policy of Blockade and intervention.

We hope everyone will take the opportunity to come to the events to hear from Fernando about his experiences as a newly elected member of the Cuban National Assembly.