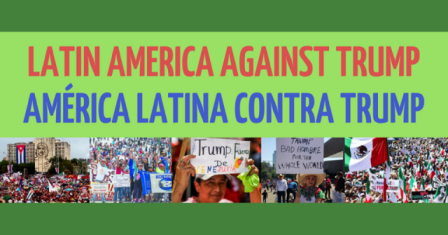 When Donald Trump turns up in Britain in July we must ensure that he gets a very clear message that the people of Britain and Latin America reject his view of the world and his imperialist ambitions against the countries of Cuba and Latin America.

The recent horrific images of Latin American migrant children being forcibly separated from their parents and held behind bars in ‘detention centres’ clearly illustrates Trump’s increasingly racist policies. From the Mexico wall, to his aggressions against progressive countries in the region, Trump and his policies must be opposed.

Soon after coming to office, Trump turned back many of the modest changes which Obama had introduced with regards Cuba. Then on May 7 this year, at a meeting of the Organisation of American States (OAS) in Washington, his Vice-President Michael Pence, launched into an aggressive attack on Cuba, Nicaragua and Venezuela calling them a “dark cloud of tyranny.”

What we are witnessing with US aggressions across the region is a reassertion of the Monroe Doctrine adopted by the US in the early 19th century which asserts the US intention to control the destiny of the whole of Latin America. In all cases we must support the sovereignty of the people and defend their rights to organise their societies as they choose free from external threat and interventions.

When Trump turns up in Britain in July we must ensure that he gets a clear message that the people of Britain and Latin America reject his view of the world. We must make it clear that it will be the people of Cuba, Venezuela and Nicaragua themselves who are best placed to decide how they wish to run their countries.

Make sure you come along and join the protests against Trump's visit: