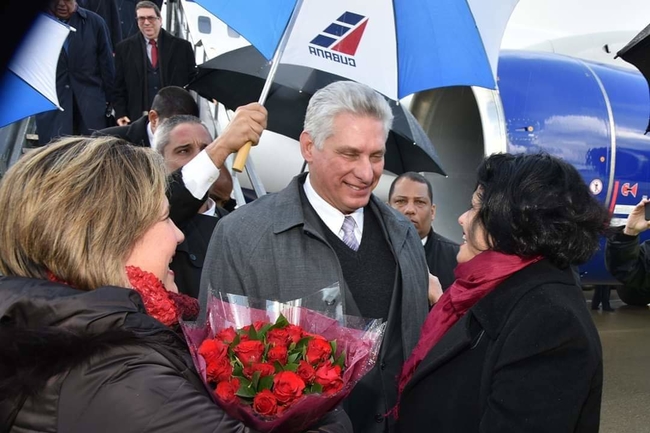 Miguel Díaz-Canel, President of the Republic of Cuba, arrived in London on 12 November on a transit visit, following his first tour of European and Asian countries.

During this historic visit – the first by a Cuban President to Britain since the Revolution – the president was accompanied by a delegation of ministers from the Council of State including Deputy President Ricardo Cabrisas, Foreign Minister Bruno Rodríguez, and Deputy Foreign Minister Rogelio Sierra. 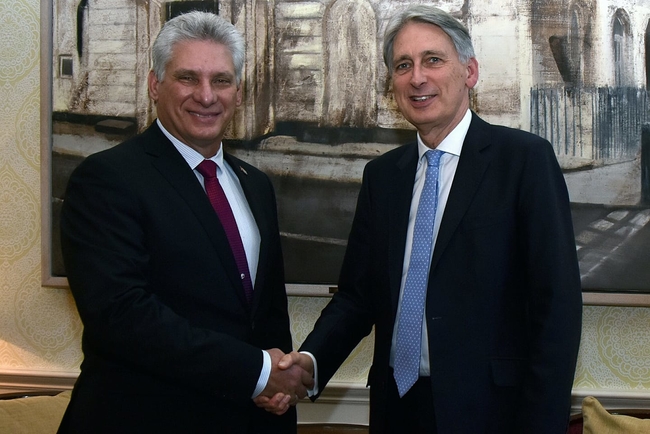 The Cuban President meeting with Chancellor of the Exchequer, Phillip Hammond MP

During his brief stay he had a packed schedule holding meetings with Phillip Hammond MP, Chancellor of the Exchequer, Jeremy Corbyn MP, Leader of the Labour Party, members of the British business community involved in the Cuba Initiative and the Caribbean Council. Additionally, the Deputy President Ricardo Cabrisas held a meeting with Dr Liam Fox MP, Secretary of State for International Trade. 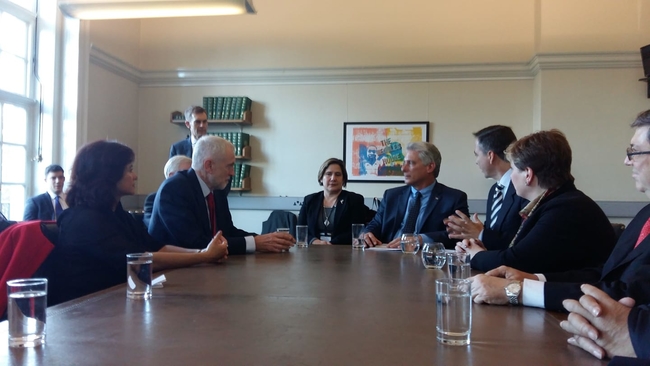 On Tuesday 13 November, the president and members of the delegation attended a welcome reception in the House of Lords, jointly hosted by Baroness Angela Smith and the Cuba Solidarity Campaign. Many members of parliament attended including Karen Lee MP, Chair of the APPG on Cuba, and Mark Menzies MP, Chair of the APPG on Latin America and leader of the recent IPU delegation to the island. 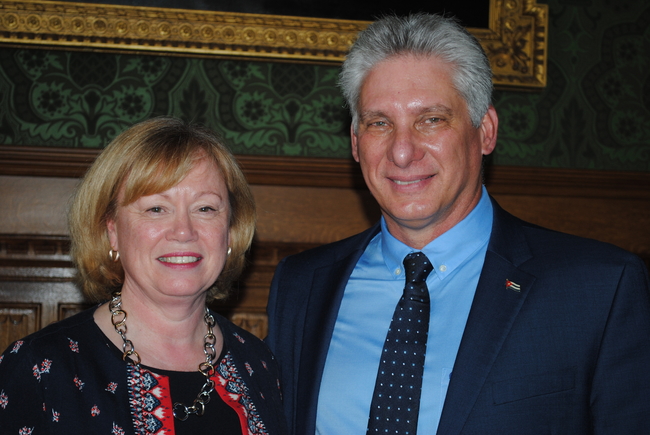 Baroness Angela Smith, Labour Leader of the House of Lords and Miguel Diaz-Canel, President of Cuba

Addressing the meeting, the Cuban President said the was struck by the warmth of his welcome: “that in a place that is so far away form Cuba, we can find so much warmth affection and love, that it seems like we have know each other for a very long time. And for that I want to thank you very much.”

He described the trip as being “very significant” for Cuba. Originally the trip was supposed to be just a transit stop over, but the British government had made it possible to have high level meetings possible.

“We’ve come to London to ratify and confirm to the British government our political will, our intent and our endeavours to continue expanding our relations,” he said. "Particularly we should recognise that our current state of our relations are good and our economic and trading relations are expanding. We have expressed that we have come to tell the British business community and financial institutions that we want them to be present in Cuba, not only as investors but also supporting and providing finance to the various projects that we are developing in our country.”

Díaz-Canel said that Cuba was especially interested in exchanges in areas such as energy, since Cuba had set out the goal of having at least 24 per cent renewable energy by 2030, as well as tourism, agriculture, telecommunications and biotechnology.

The President spoke of the huge impact that the blockade has on Cuba’s development and ability to trade. “Every time we make progress, then the blockade comes in with its extraterritorial tentacles. And one may wonder - how it is possible that we let another country make decisions on our behalf?

“And the blockade has been tightened under the Trump administration - financial persecution against Cuba has been intensified.

“This is a struggle that we have to face together,” he said. “The British government has expressed that it does not support the blockade”. 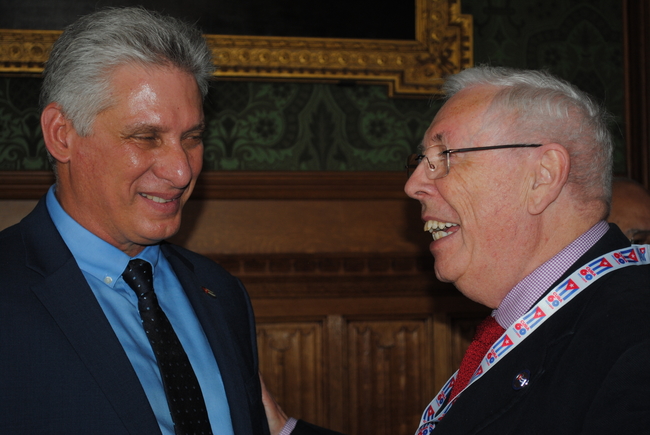 Speaking at a solidarity reception later in the evening hosted by the Cuban Ambassador HE Teresita Vicente and the Cuba Solidarity Campaign , Díaz-Canel promised representatives of the solidarity movement, trade union leaders, MPs and Cubans resident in the UK that Cuba would: “uphold and remain committed to that legacy of respect, friendship, and affection. I only ask something that we will share among us in spite of the adversities, in spite of pressures, in spite of anyone’s wishes to oppose and interfere. Among all of us, united and together, we shall overcome all obstacles, interference, and stumbling blocks and the triumph will be the best of us that will emerge from all of us together, which is friendship, solidarity and cooperation.”

The President thanked CSC Director Rob Miller, the Cuba Solidarity Campaign and the British trade union movement for its campaigning on the blockade and the freedom of the Miami Five over many years. Cuban television channel Canal Caribe filmed the reception and interviewed Natasha Hickman, CSC Communications Manager and guests.On Wednesday 14 November, the Marx Memorial Library organised for President Diaz-Canel and the Cuban delegation to visit Karl Marx’s tomb in Highgate Cemetery, north London, where the President paid his respects and presented flowers from the delegation.The visit of Miguel Díaz-Canel comes on the back of increasing exchanges and bilateral agreements between Britain and Cuba. Almost 200,000 British tourists visited Cuba in 2017. In September, MPs and Lords were part of an exchange visit to Cuba organised by the Inter Parliamentary Union, following the November 2017 visit of a group of Cuban parliamentarians to the UK. 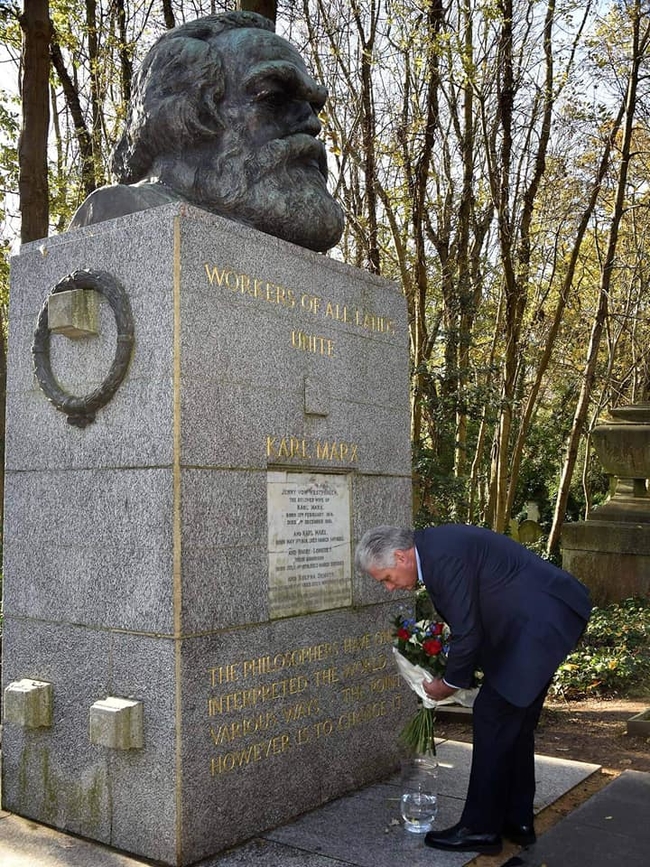 Recent ministerial exchanges include the visit to Britain of Ana Teresita Gonzalez, Cuban vice minister of Foreign Affairs in September 2018, and the first visit to Cuba by a Foreign Secretary in 2016 when Phiilip Hammond went while he was In addition to senior level bilateral contacts, agreements in banking, renewable energy technology, and biotech have recently been signed.

Internationally, Britain has continued to vote against the United State’s blockade of Cuba at the United Nations. On 1 November 2018, the UK joined 188 other countries in voting in support of Cuba’s resolution calling for the US to end its 58 year old blockade of the island.

The US blockade of Cuba has cost the island $933 billion dollars since its imposition in 1962. It hinders the development of the Cuban economy and causes shortages and suffering to the Cuban people. The extraterritorial impact of the blockade has seen British banks fined by the US Treasury department for financial transactions involving Cuba, and recently resulted in the Open University barring a Cuban student from studying at the institution – a move overturned as the result of lobbying by the Cuba Solidarity Campaign. 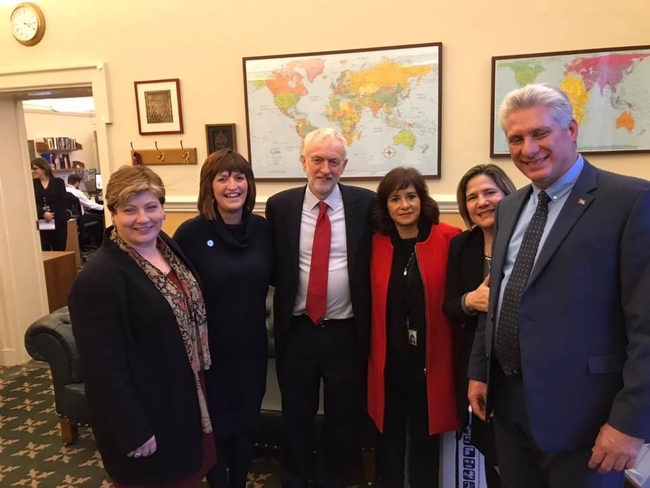 The Cuba Solidarity Campaign is proud to have worked with the Cuban Embassy to support this historic visit by a Cuban president to Britain. We hope it will foster increased understanding, exchanges and trade between our two islands, especially at a time when the United States is tightening its blockade of Cuba and trying to isolate the island from the international community. 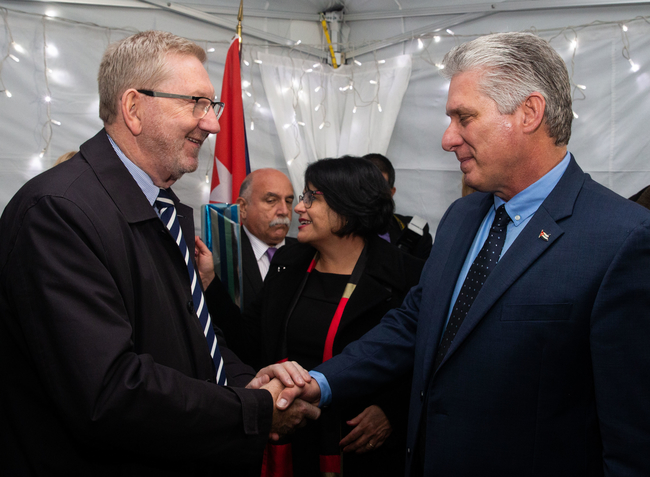 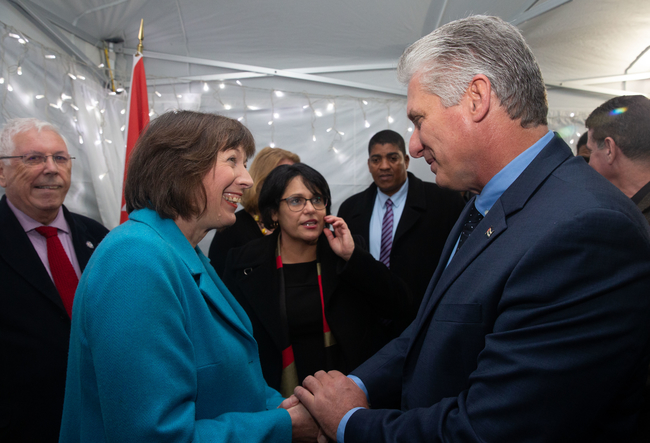 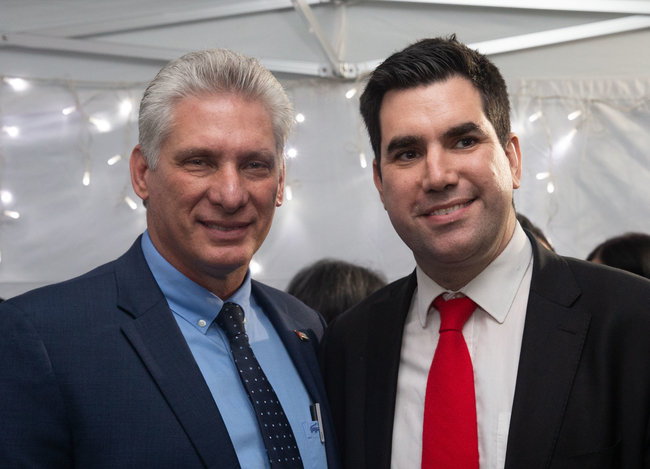