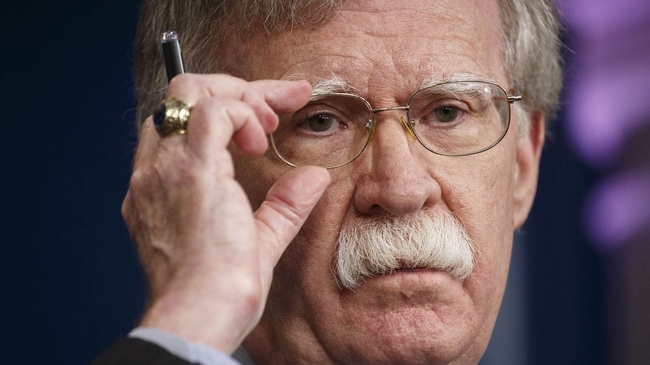 The White House said Wednesday that Bolton will travel to Brazil to meet with Bolsonaro before he takes office next year, while Trump visits nearby Argentina to meet with leaders of the world’s largest economies at the G20 summit.

“Look forward to seeing Brazil’s next President @JairBolsonaro in Rio on November 29th. We share many bilateral interests and will work closely on expanding freedom and prosperity throughout the Western Hemisphere,” Bolton wrote on Twitter Wednesday.

Bolsonaro, a far-right former army captain, who has been dubbed the “Trump of the Tropics,” has made no secret of his desire to establish close ties with the United States. Bolton and Trump officials have described Bolsonaro as a “like-minded” leader.

Since taking over leadership of the National Security Council, Bolton has ratched up pressure on Cuba and Venezuela, as seen by his recent Troika of Tyranny speech where he called the leaders of those countries, along with Nicaragua, “clowns.” He also said the United States “looks forward to watching” their governments fall.

“These tyrants fancy themselves strongmen and revolutionaries, icon and luminaries,” Bolton said during the Miami speech. “In reality they are clownish, pitiful figures more akin to Larry, Curly and Moe. The ‘Three Stooges’ of socialism are true believers, but they worship a false God.”

Bolsonaro has been similarly harsh with Venezuela and Cuba. He has threatened to break off diplomatic relations with both nations and accused Cuba of treating health professionals like slaves. He warned that Cuban doctors working in poor and remote regions of Brazil would only be able to stay if they could receive 100 percent of their pay and their families could join them.

José Cárdenas, who served in the National Security Council under George W. Bush and regularly speaks with Trump administration officials, said the new relationship has the potential “to really shake things up” in the hemisphere.

After years of strife between the United States and region’s biggest economy, the opportunity to develop a strong US-Brazil partnership is one of the most important developments in U.S. relations with Latin America in decades, he said.

“It’s been somewhat of a Holy Grail for US regional diplomacy that has invariably frustrated US policymakers,” Cárdenas said. “The Brazilian people have always been positively inclined to the US, but their Foreign Ministry has always been suspicious about US intentions.”

Fernando Cutz, a former senior director at the National Security Council in the Trump administration, said Bolton’s visit to Brazil before the new president is sworn into office was a “huge indication” that the administration and Brazilians have expectations to work together.

Cutz said Bolsonaro is saying all the right things and his ideas, such as privatizing state-controlled companies and reforming the tax code would only bring the two countries closer.

“All signs indicate this will be a great relationship,” Cutz said. “You can’t underestimate the value of a positive and close presidential level relationship. This will be one of the best we’ll see.”

The 2018 Latin America Conference on 1 December will feature sessions on Bolsonaro and threats to the region from the Trump administration. For tickets and more info: https://cuba-solidarity.org.uk/events/243/latin-america-conference-2018