Truth and justice triumph: 187 countries against the U.S. blockade of Cuba 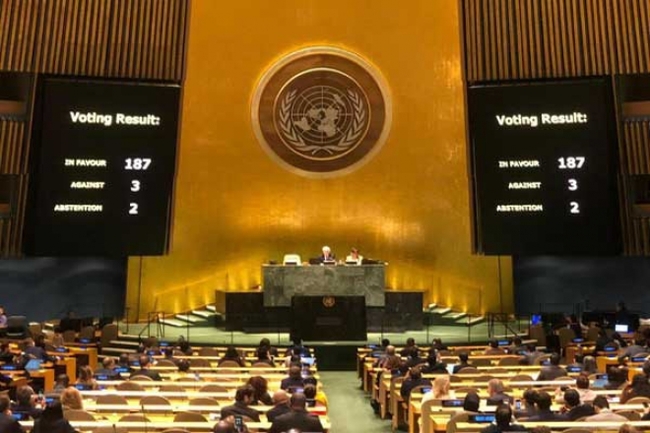 A total of 187 countries yesterday cast their votes in favor of Cuba in the United Nations General Assembly, rejecting the unjust economic, commercial, and financial blockade imposed by the United States, for almost 60 years, on an unwavering, dignified people, who do not bow down before domination. An ironic coincidence is that the Trump administration has adopted precisely 187 hostile measures to damage our economy and living conditions.

Voting against were the United States and Israel, along with Jair Bolsonaro - who incidentally represents Brazil, but is not Brazil. The abstentions of Colombia and Ukraine, completed the tiny percentage against Cuba’s resolution, a glimpse of the minimal support enjoyed by the failed policy of our malicious neighbor.

“Voting against Cuba is voting for the continuity of genocide. #SomosCuba, a victory for Cuba,” wrote President of the Republic of Cuba Miguel Díaz-Canel Bermúdez, on his Twitter account, adding, “The blockade is real and we will defeat it with the support of the international community that, in its overwhelming majority, today voted with Cuba against the blockade. Lackey governments showed where their affinities lie. And they are alone along with the empire. A victory for Cuba.”