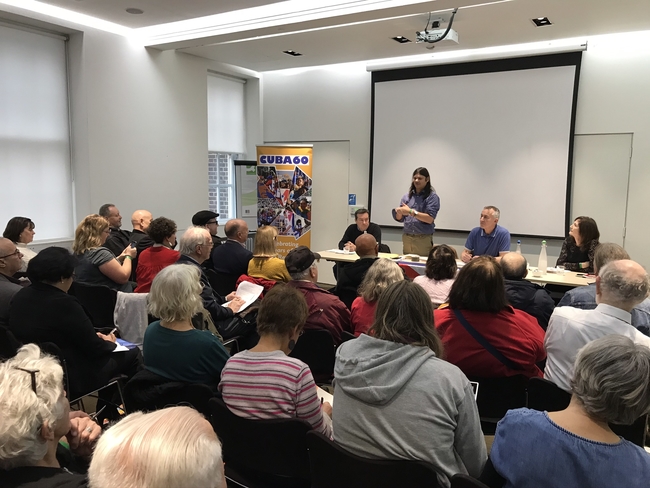 The Latin America Conference featured 24 seminars focusing on a wide range of countries, issues and movements from across the region.

In a seminar entitled ‘Misinformation and the media war against Cuba’, Dr Lauren Collins from Cuba Solidarity Campaign’s Executive Committee, analysed the press attacks on Cuban doctors working overseas on medical missions. She noted how the mainstream media had used “slurs” against these missions calling the doctors “slaves” and publishing stories on defections.

“What these articles failed to mention,” she explained, “is that the US had a programme, the Medical Parole Programme, run through US embassies, which encouraged Cuban doctors to defect to the US” with the promise of housing and lucrative salaries.

“What these articles don’t point out, is that the Cuban Medical Parole Programme has been very unsuccessful, as over 400,000 Cuban medics have worked overseas since the Revolution, with only small cases of defections”.

Ben Chacko, Morning Star editor said the media is awash with “bizarre attacks against Cuba” and how Cuba and Venezuela are both “slandered and misrepresented”.

He pointed to the “ludicrous suggestion” in Ecuador, where President Lenin Moreno has suggested that the “huge demonstrations in Ecuador, with hundreds of thousands of people, are somehow due to Cuban doctors working in the country” he said – and how the media reports follow this narrative.

“Cuba’s historic legacy is being almost written out of the the narrative in the press” he continued, such as “achievements like Cuba being the first country on earth to eliminate HIV transmission from mother to child.”

“Another world is possible is a message that they really don’t want us to receive!” Chacko said in the seminar.

Keith Bolender, who spoke at the conference as part of a three week CSC tour of Britain speaking about the media war against Cuba, said:

“The US corporate media is as much a capitalist institution as the stock market”.

He described it as “monolithic power” which uses “code words like ‘regime’ to describe Cuba that the average person assimilates”.

“Corporate media is and will remain biased, negative and completely misinformed. And it’s particularly relevant in the US as US citizens can’t even go to Cuba as tourists.

“It’s not just about what the media tells you, it’s about what it doesn’t tell you” he said, citing Cuba’s many achievements which don’t get media coverage.

During a seminar on the US blockade and Title III Enrique Santiago Romero, Spanish MP and PCE General Secretary said that these sanctions against nationalisation are illegal, as Cuba offered compensation for companies.

“Trump’s decision not to suspend Title III like his predecessors did is leading to damages to Cuba’s economy” he explained.

He mentioned the absurdity of Title III cases, such as a Cuban American who claims to own Havana airport and is suing LatAm airlines for using the airport – or trafficking his property as Title III would suggest.

“It’s likely to cause a confrontation with the US and the EU” he said. “This isn’t saying that the EU will defend the Cuban Revolution! But it may defend its companies who want to trade with Cuba. The EU has said that it may go to the WTO on this.”

Dr Emily Morris highlighted the negative impact on tourism from Trump’s tightening of the blockade. She said how “40 percent of Cuba’s import capacity is based on food and fuel - which leaves them very vulnerable” but how their “strong policy framework in health, education, full employment” and “commitment to UN sustainable development” ensures that the needs of the Cuban people are protected in light of their economic vulnerabilities.

Teresita Vicente, the Cuban Ambassador said: “We face huge challenges from the blockade but we have measures to counteract these” and emphasised that “we have no intention at all to surrender our gains... Cuba is one of the only countries worldwide that provides such a substantial amount of our GDP to health, education and social care.”

The Cuban Ambassador highlighted the impact of Trump’s recent capping on remittances as an attack on all Cuban families. “Family to family remittances have been attacked by Trump” she explained, now “only $1,000 every three months” can be sent to Cuba.

However she reassured the conference that “we are resilient, we will prevail, and will continue to run our country in the way we want to do it, with dignity.”

In a seminar on ‘Cuba60: Achievements of the Revolution’, Professor Imti Choonara outlined how “Child health mortality figures are the second best in all the Americas - only Canada is better - which is an amazing achievement for a middle income country like Cuba.”

Cuba’s success, he outlined was due to “the political commitment of the government- it’s about priorities and where you invest your resources”.

He explained that “Primary healthcare is more important than hospitals for public health” and how in Cuba, “Everyone is visited at home as well as the clinic.”

The child health specialist outlined how “In Derby, you can wait 9 months to see a child psychologist, in Cuba you may have to wait a week.

“They do not have street children in Cuba, unlike Latin America and so many parts of the word”, was another achievement that he highlighted.

Professor Choonara said how “The biggest problems in Cuban health are from the blockade - it’s about getting access to medical equipment, drugs and materials.”

Sophie Evans, who has recently attended an NEU delegation to Cuba, said how the delegation “transformed my view about what is possible in education”. She highlighted the achievements from the literacy campaign in the early years of the Revolution and outlined the challenges imposed on education from the US blockade, including preventing Cuba from obtaining materials such as Braille machines, and how access to academic journals are blocked due by the US.

Mike Jackson, Secretary of the Lesbians and Gays Support the Miners (LGSM) gave an update on the advancement of LGBT+ rights in Cuba, and recalled his experience when he attended the IDAHO (International Day against Homophobia) events in Havana: “I saw in Cuba how much Dr Mariela Castro (CENESEX Director) is adored by the LGBT+ community”. He also spoke at another seminar “The struggle for LGBT rights in Latin America and the Caribbean” alongside Brazilian journalist Ali Rocha and Denis Fernando from Rainbow Coalition against Cuba.

A seminar on Bolivia following the coup was one of the most popular meetings of the day, with standing room only. Other highlights included the session on ‘Nicaragua: For the many, not the few’, and on ‘Environment and sustainability in Latin America: Achievements and challenges in Bolivia, Brazil and Cuba,’ where Wendy Emmett, from CSC’s Executive outlined Cuba’s Project Life plan.

Updates from across the wide range of seminars can be found on the Latin America Twitter page here https://twitter.com/LatAmerica19