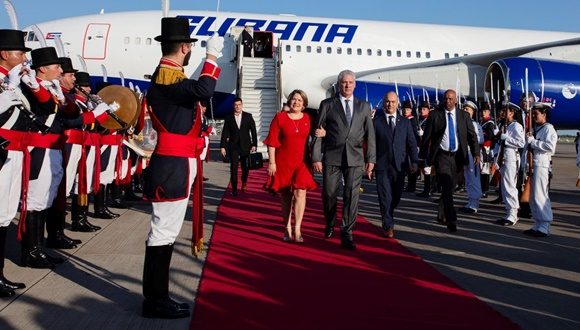 HAVANA, Cuba, Dec 9 (ACN) The President of Cuba, Miguel Diaz-Canel, arrived this Sunday evening in Buenos Aires, Argentina, to attend the inauguration of the president-elect of that southern nation, Alberto Fernandez.

At the foot of the steps of Cubana's plane, Marcelo Suárez Salvia, head of protocol and ceremonial of the Argentine chancellery, came to welcome them.

"#Argentina is a country of our #Great Homeland to which the president of #Cuba arrives, the Cuban Presidency twitter accounts published, while FM Rodriguez Parrilla when reporting also the visit in that social network describes it of "sister Latin American nation to which we are united historical ties".

Prensa Latina pointed out that during Díaz-Canel's first visit to Argentina, the Cuban president is expected to fulfill an important agenda that will include his presence in the transfer of power, which will take place in two phases, the first in the Congress of the Nation and the second in the emblematic Casa Rosada, where the president-elect will welcome visiting delegations.

Both countries established diplomatic relations on May 12, 1909, interrupted in 1962, and resumed in 1973 by President Héctor Càmpora.

The homeland of Ernesto Che Guevara, which the two nations share as an emblematic figure, was the last nation to visit the historic leader of the Revolution, Fidel Castro, in July 2006, of four trips he made to this southern land.

Argentina is Cuba's fourth largest trading partner in Latin America and the Caribbean and ninth in the world, as well as the second largest market for tourists to the island in the region, according to Prensa Latina, which also reports that 1,195 Argentine students have graduated from Cuba, 1,068 of whom studied health-related careers.

Since 2003 to date, more than 34,000 Argentineans have also been taught to read and write under the Yo, sí puedo program, while almost 7,000 have benefited from Operation Milagro.