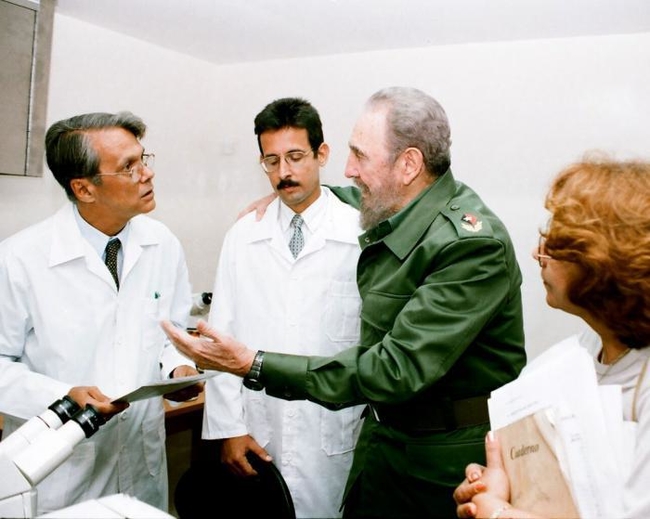 GRANMA: Our doctors understand that their daily contribution to the quality of life of their own people, and other peoples of the world, is the best way to honour their homeland, the history that has preceded them, and Fidel

Their souls are as clean as their white lab coats. Who could cast doubt? Their generosity knows no borders in an incessant battle for life, regardless of class differences and racial distinctions, asking only for renewed hope in exchange.

They have never been seen to falter. Despite the longing for their country, for loved ones who wait, held within their chests from a distance; despite the constant effort to learn new languages and cultures, their will remains ironclad, because they are driven by convictions, and strength rarely fails those who are clear about their principles.

Angels, that is what they are called by those who have found in their hands encouragement, hope, the necessary tenderness to bring a smile to the ailing, the most helpless. Angels, because those who have been victims of poverty’s oblivion do not find an earthly adjective for so much disinterest, altruism, love.

I do not doubt that a vocation as human as medicine has called millions of admirable professionals around the world, whose commitment to humanity transcends the grotesque, cruel barriers constructed by money. I do not believe, however, that there is a country where those who have chosen this path constitute an army of peace ambassadors, where there is such a concept of internationalism, such a clear recognition of health as an inalienable right of human beings. Only in Cuba - and not by chance.

Our doctors, precious products of an exceptional effort, understand that their daily contribution to the quality of life of their own people, and other peoples of the world, is the best way to honor their homeland, to honor the history that has preceded them, and Fidel, who, providing the first example, demonstrated that a humanist approach is essential to making this world a better place, more just, with less inequality.

They have reached the most inhospitable places; they have shared the pain of those who have lost everything; they have put their talent at the service of life.

And what the empire cannot abide, what hurts its pride, is that the name of this island is associated with solidarity, with humanism, with the beautiful gesture of extending a helping hand when others turn their backs. This is why they mount desperate defamatory campaigns against our medical missions, why they move their puppets, with tired pretexts, to put an end to an effort of infinite love.

But Cuba will not renounce the bridges of internationalism we have built. This is a question of principle. What are commercial and political ties worth, without human ties?

Today, when Latin American Medicine Day is celebrated, this people's tribute to our army in white coats is a spontaneous, sincere act. Among millions of people around the world who are grateful for their courage, we Cubans are the most grateful.

No matter how many sordid lies are spread, no matter how many obstacles to our solidarity arise. Our doctors will always be remembered for having made medicine a profoundly human vocation, and those who attack them, if their goal is achieved, will only be recalled for their tyrannical obsession with denying the human right to health.