Cuba's Havana Club rum faced with gauntlet of US sanctions 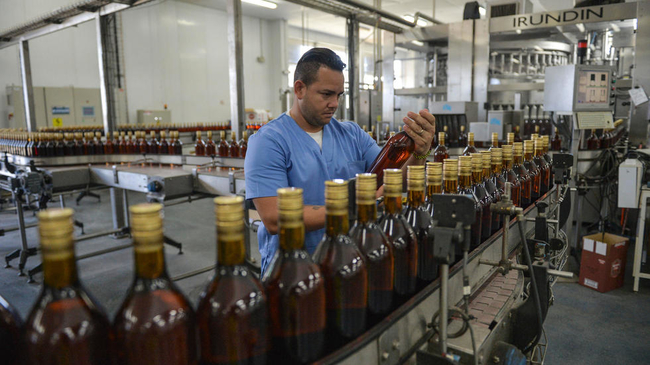 "The Havana Club liquid is 100 percent Cuban, everything originates in Cuba," he said.

However, "the cases, bottles, labels, corks, we have to import them and at any moment that can be difficult."

Those difficulties, for example, come when a "provider tells us that he can't sell to us any more, (or) when a provider in some place tells us he has problems paying us with his bank."

Such situations have arisen due to the sanctions imposed by Washington that have increased under President Donald Trump as punishment for Cuba allegedly providing military support to left-wing ally Venezuela.

Cuba has had much time to get used to the US embargo against the Caribbean island, which has been in place in one form or another since 1962.

The embargo has been particularly harsh on Cuba's rum exports since "being excluded from 40 percent of the world market already has an impact on the brand, there's no doubt about it," said Valdes.

"They're shooting to kill, but we're still here," said Diaz-Canel in December.

Sanctions have affected all sorts of industries, such as oil, finance, travel.

The rum museum in Havana lies 150 meters from the cruise ship terminal, but with US liners barred from docking, the museum has been left practically deserted.

Trump also activated a provision of the Helms-Burton law that allows Cuban-Americans to recover damages from companies that do business with the Cuban state.

That's reignited a 20-year-old judicial battle over the ownership of the Havana Club brand claimed both by the Cuban state and by US giant Bacardi, which markets a product of that name in the US but using Puerto Rican rum.

That was a drop of 40 percent in volume from 2017, but only nine percent in value due to a focus on more expensive, more elaborate products.

"The effects (of the sanctions) are numerous but the important thing is that Havana Club has had the wisdom ... to compensate for the possible negative impacts of those measures," said Valdes.

Inaugurated in 2007 at a cost of $66 million in a joint venture with French company Pernod Ricard, the San Jose plant prepares dark rum, while light rum is made at the nearby Santa Cruz factory.

The molasses -- the residue of crystalized sugar cane -- are distilled with modern technology to produce a liquor with more than 70 percent alcohol, "the soul, the heart of rum," according to specialist Asbel Morales.

"We have the most modern equipment that exists," but the task of identifying what makes Havana Club rum cannot be achieved through machines as "it's completely sensorial."

To demonstrate his point, Morales took a sample, poured it onto his hands and rubbed them together.

If the liquid takes on an oily texture, that means it's ready. Once it had evaporated, he smelled his hands to check the rum's aroma.

"It's a very traditional technique, very simple that reveals the truth, the liquor's quality."

Once approved, the rum is stored for years in American white oak barrels previously used for whiskey.

It will remain there until it has acquired it's dark color and fruity flavors, a process aided by Cuba's heat and humidity.