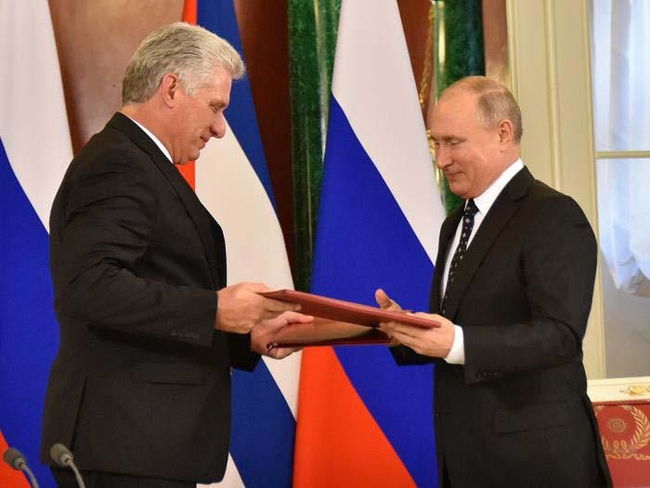 The date for the trip "will be studied in terms of the head of state’s agenda, along with other high-level bilateral contacts," Guskov added.

During his trip to Russia last October, Díaz-Canel invited the Russian President to visit Cuba. Putin stated that he would surely take advantage of the invitation.

Moscow and Havana have a political-economic relationship described by top leaders as strategic, which has expanded in recent years, with strong Russian investments in several vital sectors of the Cuban economy.

Loans that Russia plans to grant Cuba to carry out joint projects could exceed one billion euros, the Russian ambassador in Havana, Andrei Guskov, stated.

During an interview, the diplomat explained that the new Russian line of credit is being granted to make several joint projects possible, including the modernization of Cuba's railway infrastructure.

"An important part of the financing - almost 900 million euros - will be provided through commercial credit from Russian banks," he said.

According to the Russian ambassador, the design work included within the framework of the agreement to modernize Cuba's railway system began last January.

The Cuban government and the Russian railroad company, RZD, signed a contract last October for the restoration and modernization of Cuban infrastructure. This contract, valued at 1.88 billion euros, is the "largest ever signed with Cuba in the history of modern Russia."

"This is a mega infrastructure project that has great importance for Cuba, not only economically but also socially," Guskov stated.

The diplomat insisted that Russia will continue to support "by all means" this project, which foresees the design, repair and modernization of more than a thousand kilometers of railroads on the island with Russian equipment and materials.

He also said that the country is "willing to study possible proposals from [Cuban] partners to continue strengthening the defense capacity of the Republic of Cuba."

The diplomat recalled that technical-military cooperation is "one of the most important areas of interaction between" the two nations. "The Revolutionary Armed Forces of Cuba are largely equipped with Soviet and Russian-made weaponry and equipment, including anti-aircraft and coastal missile and artillery defense systems," he recalled.

Likewise, the two countries are about to launch other projects including "the second phase of the modernization of the José Martí Steel Works, Antillana de Acero, the renovation of ten 100 MW generating units at Cuban thermalelectric plants, the reconstruction of Cuban textile industry facilities, further deliveries of locomotives by the Sinara transport company, and the development of assembly plants of the GAZ Group in Cuba," he detailed.

Moscow and Havana are implementing a plan to modernize the Cuban energy system and thus reduce the country's dependence on imported oil and gas, the Russian ambassador added, recalling the "Development of the fuel and energy sector and strengthening of energy security in the Republic of Cuba" agreement was signed during a meeting of the Russian-Cuban Intergovernmental Commission for Economic-Commercial and Scientific-Technical Cooperation held last September in Moscow.

Regarding relations between the two nations, which are experiencing their best moment in the last 20 years, Cuban President Miguel Díaz-Canel has highlighted their importance by describing them as strategic. He has especially emphasized Russia's participation in plans for the island’s socio-economic development through 2030.