The history of interferon in Cuba, in use today to treat Covid-19 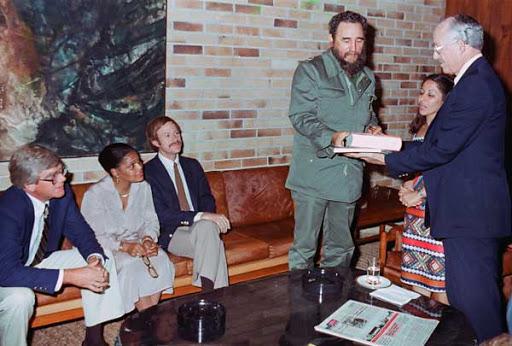 Cuba’s pride in Interferon Alfa 2b is a natural reaction given the international prestige enjoyed by the Center for Genetic Engineering and Biotechnology which produces the medication.

Recombinant Human Interferon Alfa-2b continues to make headlines around the world and captures the interest of readers given its effectiveness in treating patients with the new SARS Cov-2 coronavirus, which causes the illness known as Covid-19.

Nonetheless, it is not a vaccine that "miraculously" prevents infection, nor a 100% made-in-Cuba drug, although the Cuban technology used to obtain the Interferon molecule has made the process more efficient and improved the product’s quality.

This is not national chauvinism, but rather an accurate fact, as evidenced by the international prestige enjoyed by the Center for Genetic Engineering and Biotechnology (CIGB).

According to Santiago Dueñas Carrera, deputy general manager of the Changchun Heber Biological Technology joint venture - which produces Alpha Interferon 2b with Cuban technology - the decision to create this entity in 2003 was based on the common interest of Cuba and China to develop the production and commercialization of biotechnological products, based on the experience accumulated by Cuban scientists in this field.

Toward this end, he said, the transfer of technology, and also knowledge, from the CIGB to the new Cuba-China company for the manufacture of this therapeutic drug, with antiviral action, a process that ended in 2007 with the obtaining of sanitary registration.

"At that time, Interferon began to be used to treat conditions like Hepatitis B and C, until it was granted coverage by Chinese medical insurance, which has extended availability to 20 regions of the country.”

When Changchun Heber was founded, Interferon had already been used extensively in other countries, but the Chinese government recognized the capacity of Cuba’s biotechnology industry to develop safe and effective products, and chose to work with us, he said,

"Currently, the drug is produced at the joint venture plant in four principal formats, with different doses, all injectable: 3, 5, 6 and 10 million international units per vial, while since it began marketing, in 2007, through the end of 2019, more than four million doses had been administered, involving more than 100,000 patients in the country.

"This is the background to how 'Cuban' interferon got to China and the previous uses it was given, before in the current epidemiological situation," he said.

Since the spread of the new coronavirus," Dueñas explained, "China’s Health Commission asked companies producing interferon, including Changchun Heber, to supply this drug to the health system." It is not the only drug used to confront the pandemic, but it is one of the most used for the treatment of Covid-19, especially in aerosol form.

A BIT OF HISTORY

To understand how the development of Interferon Alfa 2b came about in Cuba, we must go back to house number 149, in the in Havana neighborhood of Atabey, with only 180 square meters of floor space, where professionalism and commitment took root.

Completely faithful to history, we can say, "It was Comandante en jefe Fidel Castro Ruz, with his visionary thinking, who understood the need for Cuba to immerse itself in the field of modern biotechnology."

This is how Gustavo Furrazola Gómez, a biologist by profession and founder of the CIGB, recalls the early days:

Work on the project began in 1981, after Fidel met with the U.S. doctor Randolph Lee Clark. "On that occasion, the leader of the Cuban Revolution had asked him about the newest treatments that were being used internationally for the treatment of cancer, and Lee Clark told him about the interferon that was being developed at the hospital he directed in Texas. Following that meeting, two Cuban scientists traveled to Texas to receive a certain level of training.”

Later, four other specialists joined this team, which traveled to Helsinki, Finland to the laboratory of Professor Kari Cantell, who had first isolated the interferon molecule in 1972.

The scientists returned to Cuba and, with the support of other professionals, that "little house" remodeled as a laboratory became the epicenter of an intense effort, making possible the first production in our country of interferon, from white blood cells, on May 28, 1981, Furrazola recalled.

"When the Cuban biotechnology industry began production of interferon, a technology very similar to that used by the U.S.-based pharmaceutical company Schering-Plough was employed.

"But we began to develop our own elements and particularities in the technology used, seeking to improve the production process," recalls Yaí Cruz Ruiseco, current director of CIGB imports, who worked for 16 years on the interferon production line.

Research studies conducted allowed us to develop methods based on established practice and scaling for production of the medicine in question, and thanks to this technology, we have been able to reach 99% purity in extracting the interferon molecule, which is very difficult, in addition to the fact that batches are produced with a high level of efficiency and security, she added.

The CIGB works jointly with the National Center for Biopreparations (BioCen), in the production of Interferon Alpha 2b, especially in the second stage which consists of filling containers and freeze-drying the product, to prepare the drug for distribution in its finished form.

We have always worked with those involved on the clinical and research side, depending on new applications of the drug with different patients, since, although it is mainly used to treat cancer, interferon also has antiviral properties, Cruz explained.

It is worth noting, she added, that this drug has been used in other epidemiological situations in Cuba, such as the dengue hemorrhagic fever epidemic in 1981, and in the 1990s, to treat conjunctivitis of viral origin, this time in the form of eye drops.

It is not surprising, that, given the Covid-19 situation, the CICB is working uninterruptedly to increase production and that workers like Gustavo Furrazola are proud to have participated in obtaining a drug that has helped so many, regardless of the hours of work he invested. As he says, in his own words, "in moments like this, we remember Fidel's visionary perspective, and this becomes another reason for our commitment."