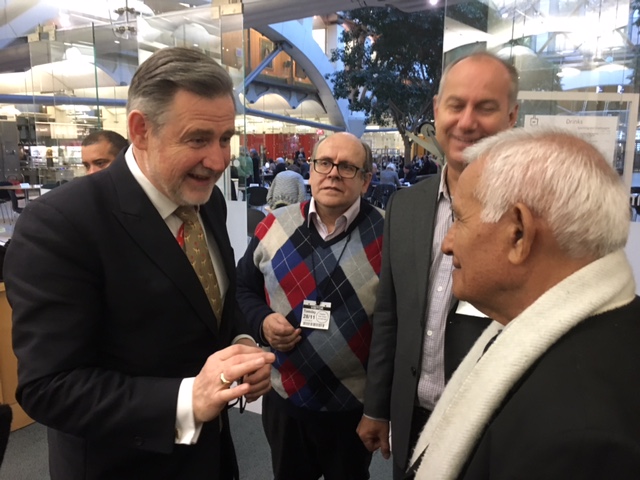 On behalf of the Cuba Solidarity Campaign and Grahame Morris MP of the United Kingdom we would like to pass on our sincere condolences to the family, friends and colleagues of Reverend Pablo Odén Marichal who passed away on 3rd May 2021.

Reverend Marichal was a great ambassador for the people of Cuba and he chaired the Parliamentary Group of Friendship with the United Kingdom in the National Assembly of People’s Power. This group worked tirelessly supporting efforts to stimulate, develop and maintain excellent links between our two parliaments and indeed our two countries. Reverend Marichal visited the UK twice in November 2004 and again in November 2017.

In 2004 he made an official visit to the UK hosted by the All Party Parliamentary Group on Cuba. The visit was a reciprocal one and followed a similar visit to Cuba by a British MPs’ delegation two years before.

The Cuban delegation held meetings at the House of Commons where they met with then Foreign Office Ministers and a number of MPs. The meeting heard a wide ranging and frank discussion focussing on the nature of Cuba's participatory democracy.

Reverend Marichal also addressed a successful public meeting hosted by the Cuba Solidarity Campaign where more than 100 people heard first hand accounts of the democratic process in Cuba. The delegation were also warmly received during successful visits to the Welsh and Scottish parliaments.

In 2017 Reverend Marichal was part of the largest parliamentary delegation from Cuba to visit the UK hosted by the Inter Parliamentary Union (IPU).

In a full day of meetings jointly organised by the Cuba Solidarity Campaign and the All Party Parliamentary Group on Cuba, the delegation met with over 25 MPs and Peers from a range of parties to discuss a full range of topics.

Jeremy Corbyn welcomed the Cuban guests and paid tribute to the recently re-establishment of diplomatic relations with the United States and the normalisation process:

“The resolution of the Cuban people, which eventually led to an agreement with United States on recognition, was a very important thing, as was the freedom of the Miami Five – which helped pave the way for that - and I hope the Trump administration doesn’t go backwards on this,” the Leader of the Labour Party said.

The Cuban MPs also took part in a packed public meeting organised by CSC and the APPG.

The greatest tribute we can give is to continue with the work of building friendship and solidarity between the people of the UK and Cuba.

Reverend Marichal was a wonderful friend to the people of the UK. He chaired the Parliamentary Group of Friendship with the United Kingdom in the National Assembly of People’s Power. This group worked tirelessly supporting efforts to develop links between our two parliaments as well as our two countries.

Reverend Marichal visited the UK in November 2004 where he met with colleagues in Westminster as well as the Welsh and Scottish parliaments where he made many friends.

In 2017 Reverend Marichal was part of the largest ever delegation of Cuban MPs to visit Britain when Six Cuban National Assembly members (MPs) visited in 2017 as part of an Inter-Parliamentary Union (IPU) exchange.

Pablo Marichal, was a founder of Cuba’s Christian Student Movement and a cleric from the Episcopal Church. He was a wonderful spokesperson for Cuba and was a strong believer in the human values embodied across Cuban society. During in his UK visits he spoke to hundreds of people explaining the role of the Cuban MPs, the Cuban National Assembly and Cuba’s electoral process. He made great friends wherever he went.

He will be sorely missed by all who knew and worked with him.

Read about his visit to UK Parliament here