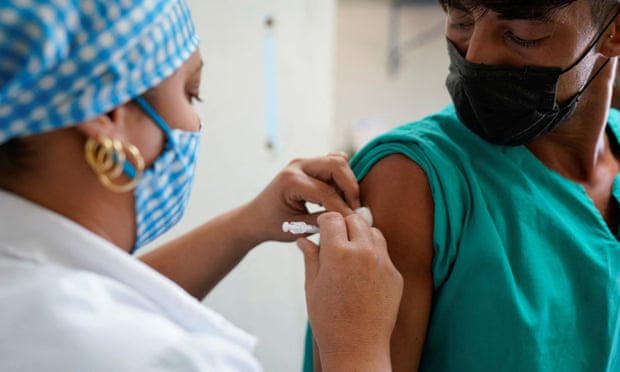 Cuba has vaccinated more of its citizens against COVID-19 than most of the world's largest and richest nations, a milestone that will make the poor, communist-run country a test case as the highly contagious Omicron variant begins to circle the globe.

The Caribbean island has vaccinated over 90% of its population with at least one dose, and 83% of the population is now fully inoculated, placing it second globally behind only the United Arab Emirates among countries of at least 1 million people, according to official statistics compiled by 'Our World in Data.'

What is Cuba's secret? While many of its neighbors in Latin America, as well as emerging economies globally, have competed for vaccines produced by wealthier nations, health officials say Cuba vaulted ahead by developing its own.

Infections and deaths from COVID-19 have plunged on the island in recent weeks, falling to less than 1% of their peak on Aug. 22, when fewer than half its citizens were vaccinated.

Nearly all of Cuba's children aged 2 to 18 have now been vaccinated with home-grown vaccines.

Schools have reopened and foreign tourists are once again welcome. Hospitals and morgues, overflowing in August, appear to be operating at pre-pandemic levels, according to Reuters witnesses.

"It is a truly remarkable accomplishment, given the size of Cuba, and also the U.S. embargo, that restricts their ability to import," said William Moss, director of the Johns Hopkins International Vaccine Access Center, a U.S.-based university group that works to ensure equitable access for low-income countries.

Cuba has said its homegrown, protein-based Abdala, Soberana 02 and Soberana Plus shots give upwards of 90% protection against symptomatic COVID-19 when offered in three-dose schemes.

However, Cuba has not yet published results of its large-scale clinical trials in peer-reviewed journals, nor has it submitted the documents required by the World Health Organization for approval of its vaccines, according to the WHO's online tally.

As a result, some public health experts in other countries remain leery of recommending them until the results are vetted.

The vaccines, which can be produced affordably and do not require deep-freezing, are seen by international health officials as a potential source for much needed doses in low-income countries in Latin America, Africa and Asia.

"They have been slow to publish results," said Moss. "If (the vaccines) got WHO qualification... that could be really important globally."

Cuba's progress is being tracked by COVAX, a global scheme designed to ensure fair access to COVID-19 vaccines.

Cuba is also studying whether the Omicron variant, which was first reported on the island on Dec. 8, will impact protection.

In the last week, new research has shown that some of the most widely-used global vaccines are likely to be less protective against infection from Omicron. The shots are expected to remain effective against severe illness and death.

The documents and data necessary for vetting the Soberana vaccines, developed by Cuba's Finlay Vaccine Institute, will be delivered to the WHO in the first quarter of 2022, Vicente Verez, Finlay's head, told Reuters.

Verez said WHO standards, which assess not only the vaccine but also manufacturing facilities, had slowed Cuba down.

"It's a first-world standard," Verez said, noting the expense involved to bring facilities to that level. "We need to advance on our manufacturing process to ensure that when we apply, we get WHO pre-qualification."

Cuba's biotech industry began to grow in the 1980s, backed by late revolutionary leader Fidel Castro, who saw the sector as vital to the communist nation's self-sufficiency in the face of the U.S. embargo. But some of its facilities are aging.

Verez said Cuba is negotiating with both Canada and Italy to produce its vaccines in those countries for export to regions in need, including Africa.

The lofty vaccination rates, a large group that gained immunity from prior infection, plus Cuba's early move to fully inoculate its children "put the country in a really positive position in the face of the future evolution of the pandemic," Perez Riverol said.

"In no way is it time to be proclaiming victory yet," he said.