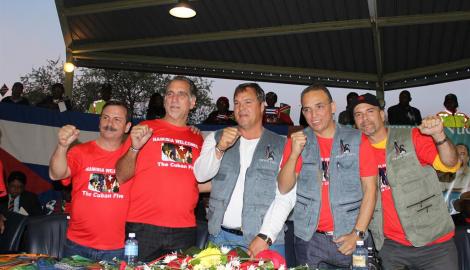 The Five Cuban Heroes were received with expressions of love and admiration during their first tour of Namibia, after a 10-day visit to South Africa; and before heading to Angola

The Five Cuban Heroes were received with expressions of love and admiration during their first tour of Namibia, after a 10-day visit to South Africa, stopping in five of the country’s provinces: Gauteng, Free State, Limpopo, KwaZulu Natal and Western Cape; and before heading to Angola.

Founding President of the Republic of Namibia, Sam Nujoma, embraced the Five at his home in Etunda, where they spoke for half an hour. Nujoma began by inquiring as to the health of the historic leader of the Cuban Revolution, Fidel Castro. Also present during the conversation was current President Hage Geingob, who described the Cuban anti-terrorists as an example of resistance.

In the capital of Windhoek, Gerardo Hernández, Ramón Labañino, Antonio Guerrero, Fernando González and René González paid tribute to the fallen of Namibia’s independence struggles at theHeroes' Acre memorial, greeted people from the community of Katutura, visited the Independence Memorial Museum and participated in a solidarity rally.

Peya Mushelenga, interim Minister of International Relations and Cooperation, who accompanied the Five for the majority of their visit, made a statement in which he expressed the significance of their visit to his country.

Fernando González, vice president of the Cuban Institute of Friendship with the Peoples, also commented on the expressions of love they had received from the Namibian people and the Cuban collaborators working in the country.

He described their stay as beautiful and fruitful, with many expressions of solidarity.

On their arrival, Deputy Minister of Environment, Tommy Nambahu, told the Five how much they are admired by the people who know of their work in defense of peace and against terrorism.

In Angola, the Five and their relations lay a floral wreath at the monument to Agostinho Neto, first President of the African nation, and spoke with Roberto de Almeida, vice president of the People's Movementfor the Liberation of Angola (MPLA).

Later, they visited the Alto das Cruces Cemetery where they laid flowers at the site where the remains of internationalist fighter Raúl Díaz Argüelles lie. Díaz Argüelles, a Cuban martyr, died on December 11, 1975, in the southern province of Cuanza Sur, from wounds sustained after a land mine explosion which destroyed his tank.

In South Africa, the Five participated in an international solidarity symposium organized by the Tripartite Alliance, which was devised during International Colloquium held in Havana in September 2014 to demand the release of Gerardo, Ramón and Antonio, then still incarcerated in U.S. prisons.

The final declaration – read out by Chris Matlhako, secretary general of the Society of Friendship with Cuba in South Africa (FOCUS) - was unanimously approved. He stated that the solidarity movement will continue to work given that, although the Five are now free, challenges still remain; such as ending the genocidal U.S. blockade imposed on the island and the return of the illegally occupied Guantánamo Naval Base territory.

Fathe Michael Lapsley and Justice Zac Jacob were among the key speakers of the event, also attended by the Secretary General of the African National Congress (ANC), Gwede Mantashe, in addition to the Premier of the province of Gauteng, David Makhura.

During the encounter, each of the Cuban patriots recounted anecdotes of their case and lives in general. Ramón’s wife, Elizabeth Palmeiro, spoke about the impact of 16 years of separation on the families, as well as efforts made to secure the return of their loved ones.

The Five’s African tour began on June 21, in Cape Town, legislative capital of South Africa and the province of Western Cape, and concluded in Angola on July 8, where Gerardo Hernández, René González and Fernando González, served as internationalist fighters.