BBC exclusive interview with Gerardo Hernandez, one of the Miami Five/Cuban Five 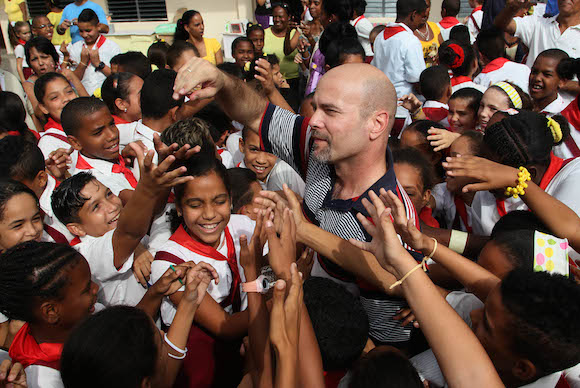 The BBC broadcast an exclusive interview today with Gerardo Hernandez, one of the Cuban Five. Gerardo was interviewed by leading UK commentator Adrian Chiles on BBC Radio 5 Live which has over 5 million listeners.

Gerardo spoke about the injustice of the case, the treatment the Five received in US jails and the ‘miracle’ of the birth of his daughter Gema.

He spoke about the aspirations of the Cuban people: “We dream of a Cuba that can improve the living conditions for our people, but for that we have to be left alone, we have to be able to work on our dreams freely without hindrance from any country and without any country spending millions, or billions, of dollars trying to subvert our system or our society”

When questioned about who was to blame for the history of animosity between US and Cuba he said: “The responsibility here is on the US side because what happened here in Cuba was a revolution supported by the broad majority of the Cuban people and the US, put in very simple terms, they wouldn’t allow a socialist revolution on what they consider their backyard. That was everything, that was the key to the problem.”

Gerardo thanked the people of Britain once again for their solidarity with Cuba and for their efforts in the campaign to free the Five: “One of the countries where the solidarity movement with Cuba in general and with the Five specifically was strongest was precisely Britain and I would like to go there and be able to thank personally so many friends there”

The full programme and interview can be heard here, with the Gerardo Hernandez feature being between 08:00 and 37:20