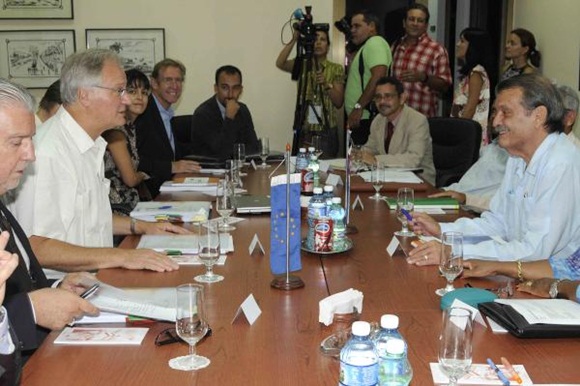 The European Union and Cuba entered the most difficult phase of their bilateral talks last Thursday when they started to discuss a new political agreement to replace a unilateral policy imposed by the Europeans 19 years ago.

The two sides have met five times over the past year-and-a-half in search of a far-reaching accord. Both sides reported on Thursday that two of the three pillars of a deal, on trade and cooperation, were basically finished, and they started talking about a political agreement between the 28-nation bloc and the communist-run Caribbean island.

The EU's decision last year to open talks was a victory in itself for Cuba as a European acknowledgment it would have to scrap its "common position," which placed a priority on democratic reforms and improved human rights in Cuba.

Cuba has always rejected foreign suggestions it should change its one-party system or that human rights on the island were lacking. Historically the loudest calls came from the United States but in 1996 were echoed by the EU, which adopted the common position at the urging of Spain's conservative former Prime Minister Jose Maria Aznar.

"All I can say about the common position is that is it is neither common nor a position," Abelardo Moreno, Cuba's deputy foreign minister for European affairs, told reporters at the conclusion of two days of talks in Havana.

His counterpart, chief European negotiator Christian Leffler, told a separate news conference the common position was still valid but stressed the EU was looking for a better and longer-lasting agreement to replace it.

Leffler said it was "no secret" the two sides remained apart on issues such as human rights but that the whole point of the talks was to search for areas of agreement.

"We know it's long-term work," Leffler said. "We're not trying to convince other countries, other governments, that there is one perfect European model to apply."

Less than a year into the European talks, Cuba and the United States announced detente, leading to the restoration of diplomatic relations after 54 years of Cold War hostilities.

In March, Cuba and the EU agreed to speed the pace of talks to reach the basics of a deal by the end of 2015, but both sides backed off that goal on Thursday. The next round was scheduled for the second half of November in Brussels.